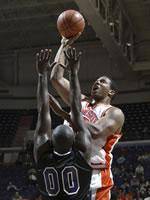 Purdue Hands Clemson First Loss Kenneth Lowe connected on three three-point goals in the game’s first five minutes and led Purdue with 24 points in a 76-64 Boilermaker victory over Clemson at Mackey Arena on December 3. The 20th ranked Boilermakers improved to 5-0 for the season, while Clemson fell to 3-1. It was Purdue’s first victory in the ACC vs. Big Ten Challenge.

Clemson was led by junior center Sharrod Ford for the second straight game. The native of Maryland had 12 points, nine rebounds and five blocked shots in a productive 33 minutes. He also shot 6-11 from the field against Purdue’s strong front line. Lamar Rice and Shawan Robinson, a pair of reserves, both added 11 points for the Tigers, who shot just 39.4 percent from the field for the game.

Chris Hobbs, a 15-point scorer entering the contest, had eight points, but played just 18 minutes due to foul trouble. Olu Babalola had seven points and a career high tying nine rebounds. Freshman guard Vernon Hamilton played just 20 minutes due to a foot injury and had two points and four assists.

Clemson shot just 1-12 on three-point shots for the game and that made three took place with just a minute left. Clemson was close to having its first game without a three-point goal in 374 games dating to the 1990-91 season at Wake Forest. Clemson did win the battle of the boards, 41-34 and committed just 14 turnovers, a season low. Again, free throw shooting was a big difference as the Tigers made just 58 percent compared to 77 percent for Purdue. Purdue outscored Clemson 27-3 in points registered from beyond the arc, as the Boilermakers connected on 9-16 for the game.

The key stretch of the game took place in the opening 10 minutes. Clemson got off to a good start, hitting four of its first eight shots and held an 8-6 lead. But, Purdue went on a 12-0 run and took an 18-8 lead at the 11:41 mark. Clemson went6:21 without scoring and that was a key stretch of the game. Purdue held the lead between 10 and 18 points the rest of the game. Clemson did cut the margin to nine with a minute left on a three-point goal by Rice, but Lowe answered back to make the final margin 12 points.

South Carolina went on a 26-10 run over the final 5:50 of the game and defeated Clemson 76-59 at the Carolina Center in Columbia, SC last February. South Carolina senior Chuck Eidson made 12-12 free throws during the game, including 10-10 inside the last five minutes to clinch the victory for South Carolina. It was the top free throw shooting performance against Clemson in the Larry Shyatt era.

Clemson was led by Edward Scott, who had 21 points in front of his hometown crowd. A group of Clemson fans dressed in #10 Clemson jerseys sat behind the Tiger bench. Scott made 8-8 from the foul line, his highest perfect free throw shooting performance of his career.

Olu Babalola was the only other Tiger in double figures with 12 points. The sophomore hit 2-3 three-point goals and had two steals in playing 31 minutes. Tomas Nagys had eight points and seven rebounds off the bench. South Carolina had four players in double figures, led by Eidson with 20 and Chris Warren with 17.

South Carolina jumped out to a 12-0 lead in the first five minutes behind seven points from Eidson. His defense held down Clemson’s perimeter players, especially Chey Christie, who had been Clemson’s top scorer each of the last two games. Christie made just 2-9 shots in the game and was 0-4 from three-point range. Clemson closed the game to 25-22, then South Carolina closed strong and led 33-24 at intermission.

Clemson scored the first four points of the second half to close the gap to four, but the Gamecocks got the lead back to nine points almost immediately. The South Carolina lead varied over the next 10 minutes between six and two points. Clemson finally cut the margin to 50-49 on two free throws by Scott with 5:50 left.

After a media timeout, South Carolina’s Carlos Powell hit a three-pointer from the top of the key, his only made field goal of the game. After a Clemson turnover, Warren scored for the Gamecocks for a six-point lead. After a Scott miss, Rolando Howell scored on a dunk, giving South Carolina a 57-49 advantage at the 4:36 mark. Behind Eidson, South Carolina made its free throws down the stretch. Their 17-point margin at the end was their largest lead of the game.

Will Solomon scored 26 points and pulled in a career high 11 rebounds, leading Clemson to a 61-58 win over South Carolina at Littlejohn Coliseum during the 1999-00 season. Solomon scored 17 points in the second half, including four three-point goals. He missed his first five three-point attempts, then made his last four. He received support from Adam Allenspach, who had 13 points and nine rebounds, including five off the offensive boards.

Andrius Jurkunas played 17 minutes in the second half with a broken thumb. He scored just two points, but had seven rebounds and four assists. His lone two points came on a tip-in to give Clemson a 57-49 lead with 1:21 left.

Edward Scott made two free throws with 20 seconds left to give Clemson a three-point lead.

Clemson trailed 27-26 at intermission, but took an eight-point lead at 51-43 with 4:45 left. Clemson still had an eight-point margin with 1:21 left, but the Tigers had trouble controlling the ball. South Carolina got the count to 57-56 with 54 seconds left. But, at the 45-second mark Damien Kinloch called timeout when he was trapped against the sidelines, a timeout South Carolina did not have. A technical was called and Clemson got the ball and two free throws.

South Carolina still was within 59-58 on a bank shot by Aaron Lucas, but Scott made two critical free throws and the Gamecocks missed two three-point attempts in the closing seconds.

Clemson won the game despite shooting just 14-30 from the foul line and committing 25 turnovers. Clemson did win the rebound margin 45-32, including a 17-5 margin over the last 10 minutes. South Carolina shot just 37 percent from the field, 23 percent from three-point land.

Clemson vs. the SEC Clemson has had some success against SEC teams in recent years. The Tigers have an 8-5 mark against the league since the 1994-95 season. This is the first of two consecutive games for Clemson vs. the SEC. Clemson plays Georgia in the Philips Arena in Atlanta next Saturday. This will be the first time Clemson has played SEC teams in consecutive games since the Tigers closed the 1995-96 season against Georgia and opened the 1996-97 season against Kentucky.

Clemson’s success against the SEC includes a victory over Kentucky in the BCA Classic in Indianapolis in 1996-97. That was the season opener that year and Kentucky was the defending national champion and ranked third in the nation. It remains Clemson’s top ranked win over a non-conference teams.

Clemson has not had great success vs. the SEC over the years. Clemson is 132-204 against the league lifetime. Clemson has a winning record against just one of the league teams (given a minimum of 5 games). The Tigers are 10-9 against Florida.