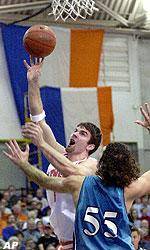 * This will be Clemson’s first game against Leonard Hamilton as the Florida State head coach, but not the first time the Tigers have faced a Hamilton coached team. Clemson has a 2-0 record against Hamilton, both when he was the head coach at Miami (FL). Clemson defeated Hamilton and the Hurricanes at Clemson in 1994-95 (75-55) and at Miami in 1995-96 (66-52 in overtime).

* Clemson is coming off a 78-77 win over Virginia. That was Clemson’s first win by one point since the 1991-92 season, a 68-67 victory over Florida State. Clemson had lost nine straight games decided by one point.

* Clemson forward Tomas Nagys has averaged a free throw attempt every 3.53 minutes of play this year. That is almost twice as often as any other Clemson player. His pro-rated to 40-minute game averages are 23.3 points per game and 10.8 rebounds per game. He has just three turnovers in 67 minutes.

* Clemson is coming off a victory over Virginia in which Clemson perimeter players had 18 assists and just two turnovers. The perimeter players made 14-24 shots from the field and scored 34 points in the game.

* Clemson guard Edward Scott went over the 500 mark in career assists with six in the win over Morris Brown. Scott now has 519 for his career, third in Clemson history behind Terrell McIntyre and Grayson Marshall. He now has 962 career points and needs just 38 points to join Terrell McIntyre as the only players in Clemson history with 1000 points and at least 500 assists.

* Forward Olu Babalola connected on two free throws with 5.7 seconds left to defeat Virginia on January 18. Babalola became the first Clemson player to score the winning points inside the last 20 seconds of a game in seven years.