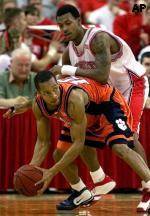 * Clemson guard Edward Scott became the ninth player in ACC history to reach 1000 points, 500 assists and 400 rebounds in a career when he had eight rebounds at Virginia. That gave him 403 for his career. He scored 32 points in that game, his season high and the second highest total of his career. His career best is 36 against Florida State, last year in a game at Clemson. Scott has scored 78 points over the last three games. He has had at least 20 points in three consecutive games for the first time in his career.

* Clemson is coming off back to back ACC victories for the first time since last year when the Tigers defeated Georgia Tech and Virginia to open the ACC schedule. Clemson will be looking for its third straight ACC regular season win today, something the Tigers have not done since winning the first five games of the 1996-97 season. Clemson did defeat three straight ACC teams in1997-98, but one of the wins was in the ACC tournament. A win today would give Clemson three straight league wins in the month of February for the first time since 1990.

* Senior Tomas Nagys has scored in double figures in consecutive games for the first time in his career. He had 11 points in the win over Virginia and had 15 in the victory over North Carolina. He was 3-3 from the field and 8-8 from the line in that win.

* Clemson continues to lead the ACC in field goal percentage. Clemson has connected on .463 for the season.