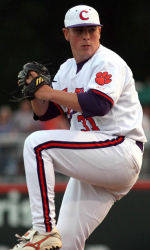 Clemson vs. Elon Clemson (26-13), ranked as high as #17 in the country, will play host to Elon (22-20) on Tuesday night at Doug Kingsmore Stadium. First pitch is scheduled for 7:15 PM. The game will be broadcast live on the radio by WCCP (104.9 FM) out of Clemson and can be heard live on the internet at WCCPFM.com. The game will also be shown live via webcast at ACCSelect.com. Live stats will be available at ClemsonTigers.com as well.

In 2006, Clemson won both regular-season meetings by scores of 5-3 and 7-4. The two teams also met in the 2006 Clemson Regional, as the Tigers came away with a 13-3 victory in that contest. The Tigers have won each of the last four meetings after Elon won four of the first six matchups.

Head Coach Jack Leggett is 6-3 against Elon while at Clemson and was 1-3 while at Western Carolina, therefore is 7-6 all-time against the Phoenix.

The Starting Pitchers Elon will start freshman lefty J.D. Reichenbach (3-3, 6.34 ERA) on the mound Tuesday. The Doylestown, PA native has made five starts and 10 relief appearances for a total of 32.2 innings pitched. He has yielded 49 hits (.348 opponents’ batting average) and 20 walks with 14 strikeouts.

The Tigers will counter with junior righthander P.J. Zocchi (3-1, 4.58 ERA) on Tuesday. The Bronx, NY native has made seven starts and two relief appearances for a total of 35.1 innings pitched. He has allowed 39 hits (.281 opponents’ batting average) and 15 walks with 35 strikeouts. Zocchi has not made a start since March 30 against Miami (FL).

The Phoenix Elon, led by 11th-year Head Coach Mike Kennedy, enters Tuesday’s game with a 22-20 overall record and 11-7 SoCon mark after being swept at Western Carolina over the weekend. After winning eight of nine games, Elon has dropped five games in a row. The Phoenix are also 7-13 on opponents’ home fields.

Chris Dove is hitting a team-best .357 with 16 stolen bases. Chris Vasami is batting .340 with four homers and a team-high 37 RBIs, while Ryan Addison is hitting .303 with eight homers, 33 RBIs, and 16 steals. Robert Rodebaugh has also slugged eight long balls this season.

The pitching staff has a 5.43 ERA and .291 opponents’ batting average. The team has allowed 212 walks with 282 strikeouts. Five different players have accounted for the team’s five saves. The team is fielding at a .965 clip as well.

The Tigers Clemson enters Tuesday’s game with a 26-13 overall record and 11-7 ACC mark after falling twice in three games to #6 Virginia at home over the weekend. The Tigers, who are 19-7 at home and in the midst of an 11-game homestand, also bring a #17 national ranking into the week.

The pitching staff has a 3.22 ERA and .244 opponents’ batting average. It has combined to strike out 333 against 116 walks. Daniel Moskos has a team-high six saves, while Stephen Clyne has a 1.03 ERA along with two saves in 18 relief appearances. The team is fielding at a .971 clip as well.

Polls Clemson fell to the #19 spot in the Baseball America poll and #21 in the Collegiate Baseball poll on Monday after going 1-3 in four games last week. Clemson also dropped to #17 in the Sports Weekly poll.

D’Alessio Coming of Age at the Plate Andy D’Alessio would admit that his senior season has not turned out like he had hoped, but recent games have indicated that he is returning to his 2006 form, where he hit 23 homers with a national-best 85 RBIs. Since he missed five games in the beginning of April due to a groin injury and has become healthy again, he has been on a tear. In the last five games, he is 9-for-18 (.500) with three doubles, two homers, and eight RBIs. He has a .550 on-base percentage and 1.000 slugging percentage in the last five games as well. Thanks to his recent surge, he is hitting .303 with five homers and 24 RBIs in 34 games this season.

Kopp Arresting Batters Junior righthander David Kopp (Margate, FL) has a 4-2 record and 3.22 ERA in 11 starts this season. In a team-high 62.1 innings pitched, he has allowed 58 hits (.247 opponents’ batting average) and 19 walks with a team-best 50 strikeouts. He is the only Tiger to pitch at least 5.0 innings in every one of his starts this year. In ACC regular-season games, he has been even better. In five conference starts, he is 2-0 with a 2.27 ERA with 36 strikeouts against only eight walks in 31.2 innings pitched.

In his best start of 2007 on April 21, he pitched 7.0 masterful innings against #6 Virginia, a team that entered the week 13th in the nation in batting average. He allowed just two hits, no runs, and two walks with five strikeouts in a no-decision.

Virginia Takes Two of Three at Clemson Virginia, ranked #6 in the nation, won two of three games over #13 Clemson at Doug Kingsmore Stadium from April 20-22. Virginia, who totaled 13 steals, outscored the Tigers 9-5, but Clemson outhit the Cavaliers .209 to .202 in the series. The Tigers were just 4-for-36 (.111) with runners on base and 2-for-19 (.105) with runners in scoring position in the series as well. Andy D’Alessio was 4-for-10 with a homer and three RBIs. The Tigers had a 1.33 ERA, allowing just 20 hits and four earned runs with 28 strikeouts in 27.0 innings pitched. The three Tiger starting pitchers combined to allow just one earned run in 17.0 innings pitched as well.

In game-one on April 20, Jacob Thompson limited Clemson to three runs on six hits in 8.0 innings pitched to lead Virginia to a 5-3 win at Doug Kingsmore Stadium. Thompson allowed just one walk with six strikeouts to improve to 9-0 on the season. Only one of the five runs allowed by three Tiger pitchers were unearned, as Virginia scored three unearned runs in the fourth inning. Clemson pitchers fanned 14 Cavaliers as well. D’Alessio’s two-run homer in the sixth inning cut Virginia’s lead to a run. The Tigers had the potential tying run on second base in the ninth inning before Alex Lee struck out to end the game. Virginia outhit the Tigers 11-7 and left 13 runners on base. The Cavaliers also stole nine bases in nine attempts.

In game-two on April 21, three Cavaliers combined on a four-hit shutout, as Virginia blanked Clemson 3-0 at Doug Kingsmore Stadium. Matt Packer, Michael Schwimer, and Casey Lambert combined to allow four hits and six walks, but stranded all 11 Tiger baserunners to notch the shutout. Clemson had the bases loaded in the ninth inning before David Kopp pitched 7.0 scoreless innings of two-hit ball with five strikeouts.

In game-three on April 22, Doug Kingsmore Stadium. Hinson, who took a no-hitter into the seventh inning, allowed one hit with five strikeouts to earn the win. Alan Farina pitched the final 2.2 innings, allowing one run on two hits to pick up his first save as a Tiger. Clemson scored a run in the first on D’Alessio’s run-scoring single. After Brandon Guyer robbed D’Alessio of extra bases and started a double play with a diving catch in left field in the eighth, Marquez Smith blasted a two-out, solo homer to up Clemson’s lead to 2-0. Virginia scored a run in the ninth before Brandon Marsh grounded into a game-ending double play. Clemson outhit Virginia 8-3, while the Cavaliers stranded 10 runners on base.