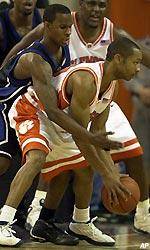 * Edward Scott will make his 99th career start when the Tigers face Duke in Cameron Indoor Stadium. That means his 100th will come next Wednesday when Clemson plays at Columbia, SC against South Carolina. Columbia is just a few dribbles from Eastover, Scott’s hometown.

* The contest on Sunday night at Duke will feature the ACC’s top two players in terms of assist/turnover ratio. Duke guard Chris Duhon leads the conference in that category with a 2.63 figure, while Clemson’s Edward Scott has a 2.39 figure.

* Clemson continues to lead the ACC in field goal percent, a position the Tigers have held all season. Clemson has shot at least 50 percent from the field in seven games this season and has a .475 mark overall for the 18 games.

* Chris Hobbs has made 15 of his last 19 free throws after starting the year shooting 48 percent from the line for his first 12 games.

* Clemson averaged 17.3 turnovers per game over its four-game losing streak, then had just 12 turnovers in the win over Georgia Tech. Clemson held the Yellow Jackets to 2-15 three-point shooting. NC State had made 14-31 in the previous game against the Tigers, a Wolfpack victory.

* Clemson has not won at Duke since the 1994-95 season, a 75-70 Clemson victory. Duke was ranked ninth in the AP poll heading into that game, the same ranking the Blue Devils have heading into Sunday’s game at Cameron Indoor Stadium.