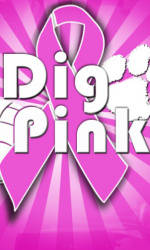 Friday night’s match is Clemson’s annual Dig Pink event, in which the team raises money for the Side Out Foundations, which supports breast cancer awareness. Fans can contribute many way: Dig Pink T-shirts will be on sale for $10, a $1 raffle for a Jawbone Jambox, and the team’s pink warm-ups will be auctioned off. There will also be an auction for signed balls from Jolene Hoover, Jack Leggett, Brad Brownell, and Dabo Swinney. Fans are encouraged to wear pink as well to help show support.

Both matches will be available via live video courtesy of TigerCast, and Gametracker is also available for each.

The Tigers play these two matches at home before heading back on the road for four more. And don’t return for a home match until Nov. 18.

Duke defeated Clemson earlier this season in five sets on Sept. 24 at Cameron Indoor Stadium. The fifth set, which went 25-23 in favor of the Blue Devils, is believed to be the second-most points scored in a fifth set in the rally scoring era. Each team fought off six match points in the set, with Clemson unable to convert on the first five.

The Tigers dropped the first set at Wake Forest on Sept. 23, but stormed back to win the next three sets and escape with a win in Winston-Salem. Wake Forest’s head coach, Heather Holmes, is one of Clemson’s all-time great setters.

Sandra Adeleye enters the match leading the Tigers at 3.19 kills per set, but junior Serenat Yaz has averaged 3.26 kills per set during ACC play. Hannah Brenner has ten double-doubles on the season, tops on the team, while Yaz has added seven of her own.

Also coming on strong is Mo Simmons, who has double-doubles in back-to-back matches entering, and is averaging 2.70 kills per set in ACC play. Junior middle Alexa Rand is also coming off a strong weekend, and needs just three total blocks to move past assistant coach Kelsey Murphy for 8th on the school’s al-time list. She already ranks 5th in school history in block assists.