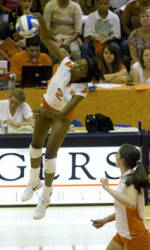 The Clemson volleyball team will travel to College Park, MD and Chestnut Hill, MA for matches with the Terrapins and Eagles on Friday and Sunday, respectively. The trip will mark the final two road matches for the Tigers (18-7, 8-5 ACC) in the 2009 season, as their final five matches are at home. Clemson will play Maryland at 7:00 pm on Friday, and BC at 12:00 pm on Sunday. Both matches will have live scoring available.

The team will try to win their 19th and 20th matches of the season, and in doing so would be the fourth consecutive season reaching that mark, a first in Jolene Jordan Hoover’s career. Hoover has put together three straight 20-win seasons three time in her career, but this could be the first senior class to win 20 or more matches in each of their four years since the 1995 class.

Senior Didem Ege is closing in on the ACC record in career digs with 2,166. She needs just 35 more to move into second all-time and 72 to set the mark. She has no fewer than seven matches to accomplish the feat. She is also the ACC’s all-time leader in career digs/set at 4.90.

Setter Kelsey Murphy can become the second setter in Clemson history to surpass 5,000 assists with 158 more. She is already the only player in ACC history with 4,000 assists, 1,000 digs, and 400 blocks.

Freshman Sandra Adeleye has come into her own lately, leading the Tigers in kills in each of the past three matches, including a career-high 19 at North Carolina. She is now averaging 2.58 kills/set, third among all league freshmen.

Clemson defeated both Maryland and Boston College earlier this season in Jervey Gymnasium by 3-0 margins. On October 9, Didem Ege had 28 digs in only three sets, and held the Eagles to .145 hitting. The next day, the Tigers took advantage of 11 service errors by Maryland to win their fourth match in five outings. Natalie Patzin had 10 kills to lead Clemson, and Ege had 21 digs as the Tigers held Maryland to .133 hitting.

Maryland has won two of their past twelve matches, and have been swept seven times during that stretch. The Terps did pick up a key victory on October 25 against Virginia Tech, who beat the Tigers in five sets.

Maryland has a balanced attack, with three players averaging more than 2.40 kills per set. Maddi Lee led all attackers with 15 kills in the last match against the Tigers. Lia Scott averages more than a block per set defensively. Libero Sam Rosario is one of the top servers in the conference, averaging 0.44 aces/set, second in the ACC.

Boston College has struggled lately, as Clemson’s victory on Oct. 9 was the first of a current eight-matching losing streak. The Eagles, who started 10-1, are now 1-12 in ACC play with a 3-0 victory against NC State.

Taylor Williams leads the team with 267 kills, and is averaging 2.84 kills per set. The Eagles register 2.24 blocks/set as a team, among the best in the conference.

After the trip up north, the Tigers will return home for their final five matches. Clemson will play host to #16 Florida State on Friday at 7:00 pm and Miami on Saturday at 6:00 pm.