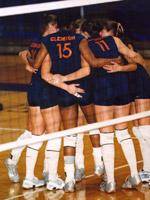 Clemson Volleyball To Play Host To Virginia And Maryland This Weekend

CLEMSON, SC – The Clemson volleyball team will play host to Virginia and Maryland this weekend in Jervey Gym. The Tigers will take on Virginia Friday night at 7:00 p.m., then on Saturday, Clemson will play host to Maryland beginning at 6:00 p.m. Admission is free to all home matches.

The Tigers enter this weekend with an 11-6 overall record and 1-1 mark in ACC play, after defeating NC State 3-0 last weekend. This season, Clemson has posted a 6-2 record in Jervey Gym, with wins over Furman, Winthrop, South Carolina, East Tennessee State, Charleston Southern and Illinois-Chicago.

Virginia is 17-1 overall and 1-1 in conference play entering this weekend’s match, after defeating Duke in five games, but falling to Wake Forest 3-1. Paige Davis leads the Cavaliers with 248 kills, a 4.00 kills per game average and a team-best 22 service aces. Alexis Geocaris has 174 kills with a team-high .382 hitting percentage. Geocaris leads Virginia at the net with 78 blocks (15 solo) and a 1.26 blocks per game average. Shannon Boyle has recorded 158 kills with 70 blocks (12 solo), while Lindsay Osco has 149 kills with 188 digs. Whitney Ashcraft has tallied 316 digs with a 5.10 digs per game average, while Kristin Chaney has 151 digs and 120 kills. Emily Kirkwood has recorded 510 assists with 199 digs, and Kathleen Branagh has 305 assists with 62 digs.

Clemson boasts a 28-8 all-time record against Virginia, and a 14-3 mark in Jervey Gym. Under head coach Jolene Jordan Hoover, the Tigers have tallied a 16-3 record, with two losses in 2000 and one loss in 1998.

The Tigers hold a 23-22 all-time edge against Maryland, after splitting last year’s matches with the Terrapins. Under Hoover, Clemson has posted a 13-8 record and is 8-7 in Jervey Gym.