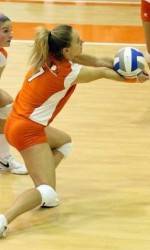 This weekend marks an opportunity for Clemson to move up in the standings, which could propel them toward an NCAA berth later in the season.

Defensively, Didem Ege moved over the 2,000 dig mark last week, becoming only the sixth player in ACC history to do so. As a team, Clemson ranks ninth nationally in blocking at 2.92 per set, and are led by Rand, who is 11th individually in blocking.

The Tigers own a combined 43-20 all-time record against the Hokies and Cavaliers.

Clemson leads the all-time series with Virginia 34-14, and won both meetings in 2008. The Tigers have won four out of the last five meetings with the Cavaliers, whose last win against the Tigers was in 2007, Clemson’s only ACC loss that year.

Virginia had a solid 6-4 start, including a win in their first ACC match with Virginia Tech. The Cavaliers have since struggled, dropping seven of their past eight. The Cavaliers have only gone to five sets once this season, a 3-2 win against VCU. Two of their early season losses were to top-ten teams in #5 Nebraska and #8 UCLA in Lincoln, NE.

The Cavaliers are offensively by Simon Asque and Lauren Dickson, who are each averaging more than three kills/set. The Cavaliers hit .209 as a team but allow opponents to hit .256. Twelve Cavaliers have seen significant action in the season so far for head coach Lee Maes

The Tigers hold a 9-6 edge with the Hokies, and have won four of the last five meetings. However, the Hokies defeated the Tigers in four sets last season in Blacksburg, while Clemson swept Virginia Tech at home in the second meeting.

Clemson has its work cut out when it travels to Blacksburg, where the Hokies are 8-0 this season. The Hokies have a balanced offensive attack, with five players averaging more than two kills per set, and four more above one kill/set.

The Hokies opened the season 9-0, before dropping five of their next seven. However, the Hokies have won two consecutive matches, defeating NC State, 3-0 and UNC, 3-2 to preserve their perfect home record.

After their trip through Virginia, Clemson will return home for a Tuesday match against Charlotte, before getting back into league play with in important home weekend against Duke and Wake Forest on Oct. 23-24.