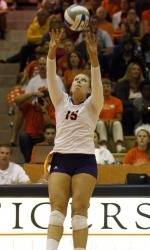 CLEMSON, SC – The Clemson Volleyball team, winners of five straight matches, will travel to Wake Forest and Duke this weekend to dive headfirst into conference play. Clemson (9-3, 1-0 ACC) opened the ACC season with a 3-0 win over Georgia Tech last Friday, and looks to continue the solid play against Wake Forest (4-6, 1-0 ACC) on Friday at 7:00 pm and Duke (6-4, 0-1 ACC) on Saturday at 8:00 pm.

Video of Clemson’s match against Wake Forest is available online at WakeForestSports.com, and livestats for each match are available at ClemsonTigers.com.

The Tigers head on the road for the third time in the last four weekend, this time getting deeper into conference play before returning to Clemson for four straight home matches.

Heather Kahl Holmes, Wake Forest’s head coach, was a four-year letterwinner at Clemson and still ranks in the top ten in school history in assists, digs, aces, and assists per set for a career. The Tigers are looking for revenge as the Deacs swept the Tigers a season ago at home and on the road. Wake opened ACC play with a 3-1 win over Duke last week. Clemson holds a 25-12 lead all-time in the series.

Duke was selected in the preseason as the favorite to win the league, but suffered an early setback at the hands of Wake Forest. The Tigers have a chance to make a strong statement when they head to Cameron Indoor Stadium to take on the Blue Devils at 8:00 pm Saturday in a match that follows Duke football’s home game against Tulane at 3:30 pm. Duke leads Clemson, 34-20, in the all-time series.

The tough weekend comes at a good time for the Tigers, who appear to be hitting their stride at the right time. This pairing was trouble for Clemson last season, but the Tigers will be prepared for this trip into North Carolina.

Clemson has won five in a row, claiming championships in both the College of Charleston Invitational and the Clemson Classic.

Sandra Adeleye leads Clemson offensively, averaging 3.37 kills per set, and her .411 hitting percentage is second in the ACC behind Alexa Rand, whose .439 mark is seventh nationally. The two Clemson middles are averaging a combined 5.61 kills and 2.29 blocks per set.

Clemson is hitting .276 as a team, which ranks 4th in the ACC and 19th nationally. Setters Hannah Brenner and Kamryn Sherman have been effective in spreading the ball around, as five players currently average between 1.95 and 3.37 kills per set. Brenner dished out her 1,000th career assist in just her sophomore season against Georgia Tech.

Defensively, Clemson has held opponents to .144 hitting, the second-best mark in the ACC. Additionally, with an average of 2.50 blocks per set, Clemson ranks 4th in the conference as well. With seven block assists, Rand can move into a tie for 10th on Clemson’s all-time block assist list. The junior was named to the All-Tournament team of the Clemson classic after an MVP honor the previous weekend. Rand also recorded her 500th career kill during the previous match.