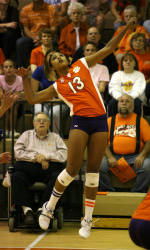 CLEMSON, SC (ClemsonTigers.com)- The Clemson Volleyball team has been predicted to finish fifth in the ACC in the 2009 preseason coaches poll as announced on Tuesday by the conference office. Three Tigers were also individually selected by ACC coaches for inclusion on the preseason All-ACC team, tied for most in the conference.

The Tigers finished 2008 with a 23-10 overall record and hosted the NCAA Tournament, defeating SEC power Tennessee in the first round. AVCA honorable mention All-Americans Lia Proctor return from that team, as well as Didem Ege, Cansu Ozdemir, and Brittany Fennell, all of whom started on the 2008 team.

Seniors Lia Proctor were each named to the preseason 2009 All-ACC Volleyball Team. The Tigers’ three selections tide for the most in the ACC with Duke, Florida State, and Miami, who each had three as well. Each of the student-athletes was on the 2007 ACC champion team which went 21-1 in ACC play. The ACC champion is determined by regular season finish.

Murphy, a native of New Lenox, Ill. was a First-Team All-ACC selection in both 2007 and 2008. Additionally, Murphy was named an AVCA Honorable Mention All-American each season, and was an All-Region selection. Murphy is third on Clemson’s all-time list in set assists, second in career assists per set, and tenth in block assists.

Ege, a 2007 First-Team All-ACC pick and Honorable Mention All-America choice, was named to her second consecutive preseason selection. The senior from Istanbul, Turkey is Clemson’s career leader in defensive saves and digs per set.

Proctor came on strong in 2008, earning second-team All-ACC honors for her performance. She was a 2008 AVCA Honorable Mention All-American and All-East Region selection. She was second on the team in kills with 420 and averaged 3.47 kills per set, the eighth most in the ACC.

The Tigers hold their Orange and White scrimmage on Saturday at 3:00 pm at Jervey Gymnasium and open the regular season on Friday, Aug. 28 with rival South Carolina in the Big Orange Bash.