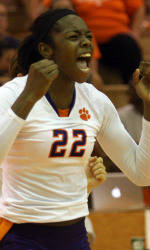 Clemson Volleyball Set to Travel to College of Charleston Invitational

CLEMSON, SC – The Clemson Volleyball team will try to get back to its winning ways as the team travels to the College of Charleston Invitational presented by Holiday Inn. Clemson (4-3) will open the two-day round-robin tournament with South Carolina (7-0) on Friday at 4:30 pm, and will take on Winthrop (4-2) and College of Charleston (3-3) on Saturday. All matches will take place in the TD Arena in Charleston, SC.

The Invitational serves as the unofficial state tournament, which has rotated locations over the past three years. Last season it was held in Rock Hill, and Clemson came away with three wins, including 3-0 over the Gamecocks and 3-0 over the host Eagles.

The Tigers will play Winthrop on Saturday morning at 10:00.

Clemson trails in the all-time series to South Carolina, 34-21, but took last season’s matchup, 3-0 in Rock Hill. College of Charleston gave the Tigers a great run last year, with Clemson eventually prevailing in five sets to pull within 12-14 in the all-time series. The Tigers hold a 21-13 mark against Winthrop.

Serenat Yaz was named the MVP of the tournament last season after compiling 48 kills and 40 digs during the weekend.

The Tigers have also had success defensively, where they rank fourth in the ACC in blocking and third in opponent hitting percentage, allowing just a .146 mark on the season.

After the two-day tournament, the Tigers return to host the Clemson Classic on Wednesday. The Classic features the Tigers, Furman, and the ACC opener in Georgia Tech on Sept. 16.