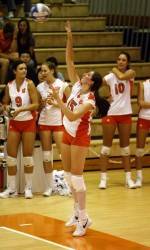 CLEMSON, SC – Clemson needed five sets to put away a scrappy Furman squad on Saturday morning, as the Tigers moved to 9-3 on the season. The seniors showed excellent leadership for the Tigers, with libero Didem Ege tying the Clemson single-match record for digs with 36, Kelsey Muphy registering 61 assists, and Lia Proctor leading the way with 19 kills and a career-best 27 digs.

For their efforts, Proctor and Murphy were each named to the all-tournament team.

As good as the seniors were, three freshmen had standout performances as well. Natalie Patzin recorded 18 kills and eight digs, Sandra Adeleye had a career-best 12 kills and seven blocks, and Alexa Rand had nine kills and six block assists. In all, the three combined for 39 kills in 81 attempts with nine digs and 14 block assists.

The Paladins looked like they might pull of a stunner in Jervey for the second consecutive match, winning the second set 26-24. With Clemson leading 11-8, the Paladins went on a 11-1 run to take a 19-12 lead. Clemson responded with a 7-1 run of their own, but after tying the match at 24, Furman again scored two consecutive points to clinch the set.

The Tigers got back in the match after the break in the third set. The teams traded points for most of the set. Clemson had a 20-18 lead late in the set, before a pair of Rand kills and an Adeleye kills led a 5-0 Tiger run to close the set.

Clemson evened the match at two apiece in the fourth set, racing past the Paladins 25-14. With the score tied at nine, Clemson closed on a 15-5 run to win. During the set, Murphy tied and passed Furman head coach Michelle Young on the all-time set assists list on a kills by freshman Lia Proctor, respectively.

In the fifth set, Proctor’s four kills led the attack. She also recorded five digs in the set. Didem Ege had nine digs, and Murphy recorded 10 assists to give Clemson a close, 16-14 win. There were 10 ties in the set. The match overall saw 33 tie scores and 10 lead changes in the matchup of Hoover and her former star as head coaches.