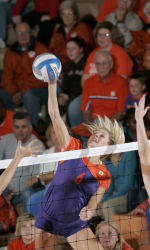 CLEMSON, SC – The Clemson volleyball team concluded its 2006 regular season with a 3-0 victory over the Virginia Cavaliers on Friday night at Jervey Gym. The win was the Tigers’ 20th of the year, against 10 losses, and gave them a 15-7 ledger against ACC competition.

Clemson will now await a bid to the NCAA Tournament, which begins on Thursday, Nov. 30. The selection show will air on ESPNEWS on Sunday at 3:00 pm.

Jeannette Abbott led the Tigers with 18 kills while hitting a .389 percentage in the match. Leslie Mansfield added 13 kills for Clemson, while Danielle Hepburn, who ranks fifth in the nation for block assists per game, finished with 10 kills and five block assists.

Shannon Davis and Sarah Kirkwood tied for match-high honors for the Cavaliers with 12 kills apiece. Davis also recorded a .588 hitting percentage in the match.

Clemson dominated the first game, winning by a 30-22 margin. Abbott totalled seven kills in the frame to go over 1,000 for her career. She now boasts 1,012 in her two seasons as a Tiger.

Game two was a tight affair throughout the first 20 points. However, Clemson took control late to claim the game, 30-25, and a 2-0 lead in the match.

In the third game, the Tigers held a 26-21 advantage late in the game. The lead prompted a Virginia timeout and the Cavaliers rallied for five straight points to tie the score at 26 apiece. The two teams then traded the next four points before Clemson posted the final two to clinch the victory.

Overall, the Tigers hit a .304 percentage in the match, while holding Virginia to just a .158 figure.