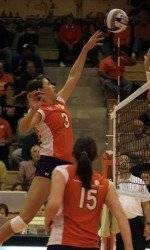 Cansu Ozdemir and senior Brittany Fennell for their contributions to the program over the past five years. Ozdemir is finishing her fifth year at Clemson after graduating in May of 2011, and is now a grad student. She joined the team in 2007, and is the last remaining player from Clemson’s 2007 ACC Championship team, a season which she sat out due to injury. Ozdemir has put together a very solid all-around career, registering 1,059 digs, 232 kills, 200 assists, 107 blocks, and 92 aces over her career. Fennell was forced to give up the sport after her sophomore season as she suffered a back injury. When healthy, Fennell was a strong middle, recording 152 kills and 112 blocks in 35 career matches. She was hitting .346 and averaging 1.07 blocks per set as a sophomore when she suffered her injury in 2009. She has been working for TigerCast this season as an announcer for the video streaming service, and will graduate in May. Friday night’s matchup, which will be carried by ESPN3, features 21st-ranked Florida State, who defeated Clemson, 3-0, earlier in the season in Tallahassee. However, Clemson defeated the Seminoles last season by a 3-0 count in Jervey. Florida State recently suffered their first ACC loss of the season to Duke, whom Clemson defeated, 3-0, in Jervey Gym on Oct. 28. Saturday’s match will pit Clemson and 22nd-ranked Miami, who also took Clemson out in Coral Gables, 3-0. The Tigers are 10-6 all-time against the Hurricanes, but have dropped three in a row in the series. Clemson will honor Ozdemir and Fennell before the match, which will be carried by TigerCast. Clemson has dropped two in a row on the road after a four-match winning streak, and will try and right the ship at home. The Tigers just got off a span of eight out of ten on the road, and return to the friendly confines where they boast a 10-1 mark this season. Admission is free to both events, and fans are encouraged to come out early and be loud to support the Tigers as they make a bid for their fourth NCAA Tournament bid in five seasons, and their fourth 20-win season in the last five seasons.