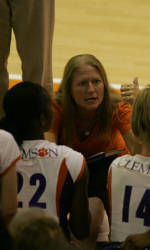 The Clemson volleyball team will travel to Rock Hill, SC this weekend to take part in the 2010 Carolina Challenge, hosted by Winthrop University. Clemson (3-0) will open with South Carolina (0-3) on Friday evening, before taking on Winthrop (1-2) and College of Charleston (3-1) at 10:00 am and 5:30 pm Saturday, respectively.

The Tigers will first look to break a three-match skid against the Gamecocks, who met in the season opener last season, a 3-2 South Carolina victory in front of 2,175 fans in Clemson in the Big Orange Bash. The Gamecocks hold a 32-20 series advantage all-time.

Clemson defeated Winthrop 3-0 last season in Clemson as the Tigers rolled up 14.0 blocks, including 9 by Cansu Ozdemir. Clemson holds a 20-12 advantage over Winthrop, including a 6-3 mark in Rock Hill.

Clemson defeated the College of Charleston in four sets last season in the big Orange Bash, registering 16.0 blocks in the four sets, including seven each from Cansu Ozdemir had seven kills, six digs, and five blocks, while Lia Proctor had 22 kills and ten digs. Clemson is only 11-14 against the Cougars all-time, but are 5-5 at a neutral site.

Clemson won the first three matches with solid defense, and rank tops in the league in blocking, second in opponent hitting percentage, and third in digs per set after the opening.

Clemson plays in the first of two road tournaments, as they travel to the Spartan Invitational in East Lansing, MI on Sept. 10-11.