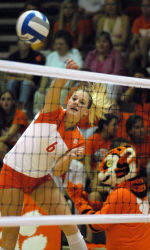 CLEMSON, SC – The Clemson volleyball team (8-4, 3-1 ACC) will be traveling north this weekend to take on Boston College (5-9, 3-2 ACC) and Maryland (7-6, 0-4 ACC). The Tigers and Eagles are scheduled to begin play at 6:00 pm on Friday at the Power Gym in Chestnut Hill, MA. Clemson will then play the Terrapins on Sunday at 1:00 pm at the Comcast Center Pavilion in College Park, MD. Fans can follow Sunday’s action on the Internet by accessing the Gametracker link on www.clemsontigers.com.

Tigers Jeannette Abbott and Danielle Hepburn are both atop statistical rankings among ACC players. Abbott’s 4.49 kills per game average leads the second-place hitter by 0.37 kills, while Hepburn’s .361 hitting percentage is ahead by .015 percentage points. Abbott has recorded 202 kills this season, including a 28-kill performance against Miami last Friday. Along with her conference-leading attack percentage, Hepburn leads the Tiger defense with a 1.53 blocks per game ratio. The mark ranks second in the ACC and is listed 21st in the nation.

Hepburn is one of three Clemson players ranked in the top 10 in the conference for blocking. Meghan Steiner’s 1.26 average is listed seventh and Kelsey Murphy ranks 10th with a 1.18 mark. Overall, the Tigers are blocking an average of 3.04 attacks per game, while also posting a .241 hitting percentage.

Scouting the Eagles Boston College has a 5-9 overall record for the 2006 season with a 3-2 ledger against ACC opponents. Earlier in the week, the Eages defeated Maryland in three games

Kelsey Johnson leads the squad with 204 kills while hitting a .214 percentage. Dorota Niemczewska has also gone over the 100-kill mark with 135 this season. Shardai Davis leads the Eagles at the net with 39 total blocks, while libero Allison Anderson is third in the ACC with a 4.78 dig per game average.

Clemson vs. Boston College, The Series Clemson leads the overall series against Boston College, 4-1. The two teams split last season’s matches, with each winning on the opponent’s home court. The Eagles defeated Clemson, 3-1, on Oct. 7 in Clemson, while the Tigers won a 3-2 decision over Boston College in Chestnut Hill on Nov. 19.

Scouting the Terrapins Entering the third weekend of ACC play, Maryland is still looking for its first conference win of the season. The Terrapins have won seven of 13 matches overall, while dropping their first five league contests.

Maryland ranks second in the ACC and 22nd in the nation with a 3.15 blocks per game average, through Oct. 1 matches. Two Terps are listed in the top five in the conference as Meredith Doyle boasts a 1.42 ratio and Katie Usher is averaging 1.33 blocks per game.

Clemson vs. Maryland, The Series With two wins against the Tigers during the 2005 season, Maryland took a 27-25 lead in the series. The Terrapins also hold a 10-8 advantage in matches played in Clemson, SC, while the Tigers have won 12 of 22 contests in College Park, MD. Last year, Maryland won over Clemson by scores of 3-1 in both College Park and Clemson. The Tigers last defeated the Terps during the 2004 season, winning a 3-0 decision in Maryland.