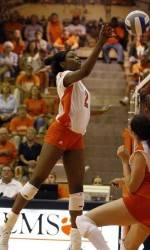 TALLAHASSEE, FL – Clemson Volleyball fell in five sets to #17 Florida State on Sunday, erasing a 2-0 deficit to force a fifth set. The Tigers (11-5, 2-3 ACC) fought with the Seminoles (13-2, 4-1 ACC) in every set, as they tried for the upset bid. The Tigers had five players with double-digit kills, led by Lia Proctor’s 20, and 14 from Sandra Adeleye.

Clemson fought its’ way back forma 2-0 deficit for the second consecutive match, but were unable to take the deciding set in this one. This is the second match this season in which Clemson has gone five sets with the #17 ranked team (Sept. 18, Michigan State).

The Seminoles played a nearly flawless fifth set, with 12 kills in 19 attacks with no errors. The Noles used a 7-1 run early in the fifth set to take an 8-3 lead. The Tigers fought back to 8-5, but a 3-0 run put the match all but out of reach. Briana Barry had a match-high 24 kills in 33 attacks with only one errors. Florida State had ten blocks in the match to hold the Clemson attack to a .240 clip.

The Tigers and Seminoles were off to a tight start in the first set, which saw 15 tied scores. Neither team was able to gain more than a three-point edge the entire set. The Tigers made five service errors in the set, which ultimately helped the Seminoles to the 26-24 victory. The Tigers had 20 kills in the set and hit .273, but hit into four blocks, while the Seminoles played relatively mistake-free, recording only two attack errors and one service error. Proctor had six kills in the set, while Patzin had five and Adeleye four.

In the second set, the Tiers opened a quick 4-2 lead before the Seminoles responded with a 11-2 run to take a 13-6 lead. Clemson fought back and brought the score back to 15-13. The teams traded points for the rest of the set, and Florida State took a 2-0 match advantage with a 25-20 win. Florida State continued its hot hitting, recording 15 kills against only three errors. The Tigers only had three errors in 42 attacks, but the Seminoles were able to handle most of what the Tigers threw at them, picking up 21 digs in the set, as the Tigers hit .214.

The Tigers stepped up the defense in the third set, holding the `Noles to a .146 mark and forcing 9 errors, while only committing four in 42 attacks. Clemson jumped out to a 8-0 lead in the set, as Lia Proctor’s kill halted the comeback, giving the Tigers a 25-23 win.

The Tigers evened the match in the fourth set with a 25-20 win. Clemson led for most of the set, jumping out to an 11-4 edge. Florida State would eventually tie the score at 16, but a Hoover timeout halted the run, sending Clemson on a 6-0 run behind Serenat Yaz’s serving. Adeleye had a pair of kills to help close out the set, in which the Tigers hit .290.

The Tigers return to action in Jervey Gymnasium as they play host to Boston College and Maryland on Friday and Sunday, respectively.