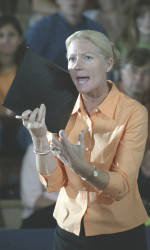 CLEMSON, SC – Head Clemson volleyball coach Jolene Jordan Hoover has announced her team’s slate for the 2007 season. The Tigers will play host to two tournaments next year, while traveling to a third, and will enter the third season of the 22-match Atlantic Coast Conference schedule. Clemson will also face three teams that advanced to the NCAA Tournament and will match-up against three teams for the first time in history.

The Tigers will kick off their season in Starkville, MS on Aug. 25 for a two-day tournament hosted by Mississippi State. Clemson will also face Arkansas-Little Rock and Murray State in the event. Both match-ups will be firsts in program history. The Tigers will return to the court two weeks later as they will open their home schedule with the 17th annual Big Orange Bash from Sept. 7-9. This year’s event features two NCAA Tournament teams as Purdue and Florida A&M join Furman in the four-team field. The second home tournament will then be held the following weekend, Sept. 14-15, as Kent State, Appalachian State and Georgia State will travel to Tigertown for the Clemson Classic.

Clemson will then open the ACC season at NC State on Sept. 21 with the first home conference contest being against Virginia Tech on Sept. 28. The Tigers will then begin a five-match road stretch beginning on Oct. 5 before returning to Jervey Gym for five straight matches on Oct. 19. Clemson’s final home match will be on Nov. 16 verses Florida State and the Tigers will conclude the regular season at Boston College on Nov. 23.

Twelve letterwinners return from a 2006 team that posted a 20-10 overall record and a 15-7 league ledger that earned them a third-place finish in the conference. All-Americans Jeannette Abbott and Danielle Hepburn will be back for their junior campaigns, while returning starters Leslie Mansfield and Meghan Steiner will enter their senior seasons. ACC second-team honoree and Tiger libero will begin Didem Ege her sophomore campaign after setting numerous school freshman records. Classmate and starting setter Sue Eckman and Courtney Lawrence, juniors Laura Boozer and Katie Bridges and sophomores Lia Proctor and Hillary Douglas. The Tigers will also welcome three rookies in 2007 as Hoover has signed Meghan Hinemeyer, Lisa Jedlicka and Cansu Ozdemir for next season.