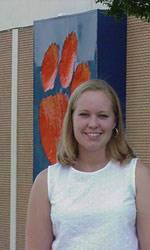 “Kelley is going to be a great addition to our staff,” said Hoover. “She is extremely bright and personable. Her ACC playing experience and coaching success at Davidson will benefit the future of our program.”

McCaffrey comes to Clemson from Davidson College where she has served as the first assistant since August of 1999. She also served as the interim head coach from January through April of 2000. At Davidson, McCaffrey helped lead the team to Southern Conference Championships in 1999 and 2000, as well as a berth in the NCAA tournament.

Prior to Davidson, McCaffrey was a member of the Wake Forest University volleyball team from 1996-99. She was elected senior captain and earned three varsity letters. McCaffrey also served as a student assistant coach at Wake Forest in the spring of 1999.

In addition to her collegiate coaching and playing experience, she has served as the director of the Davidson Juniors Club since 1999 and has been the Triad Junior Olympic coach since 1998.

“I am really excited to be a part of the Clemson volleyball program, and the tradition that Coach Hoover has established during her tenure,” said McCaffrey. “I am looking forward to being involved in ACC volleyball again. There is nothing like its rivalries and competitiveness from top to bottom.”