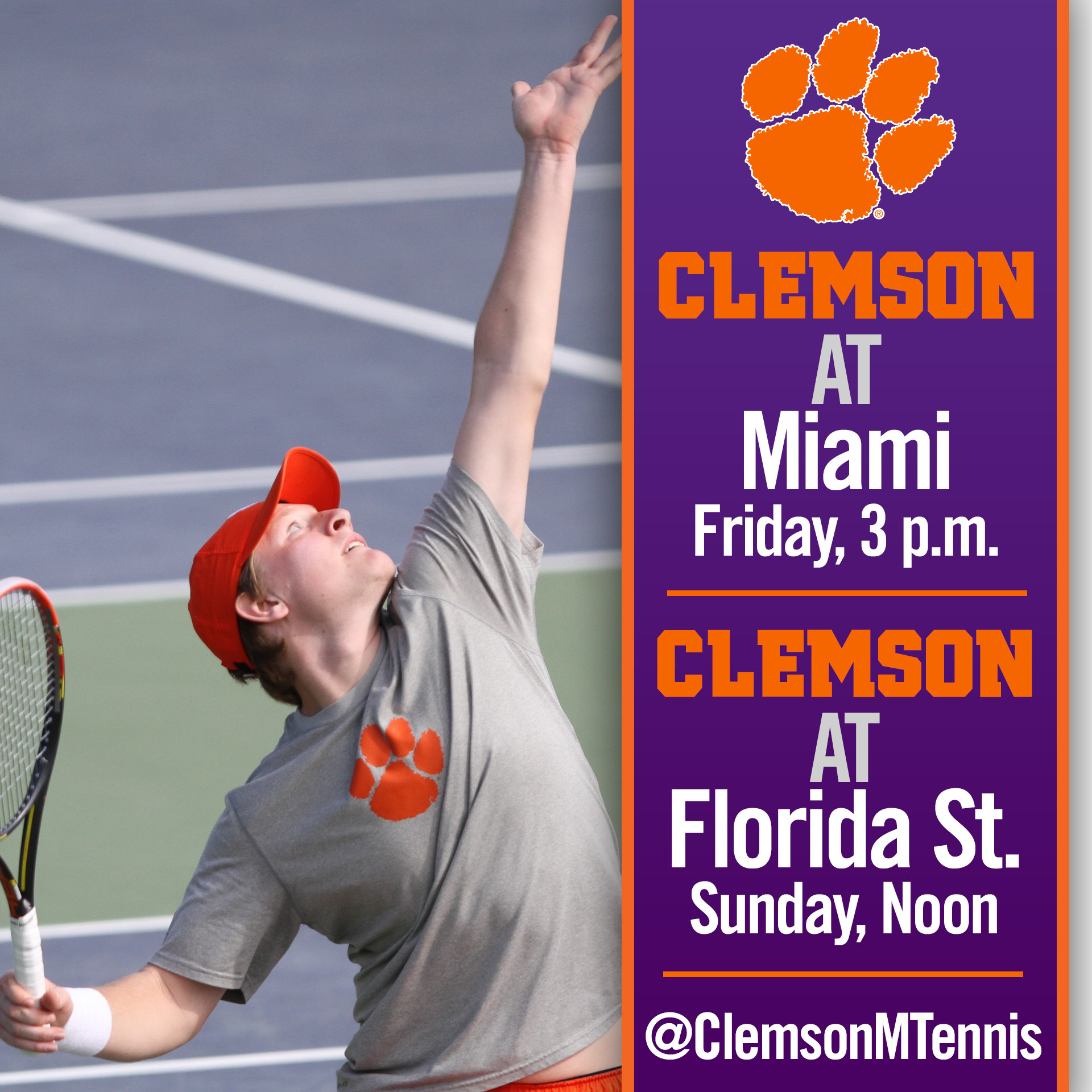 CLEMSON, S.C. – The Clemson men’s tennis team heads south this weekend to visit Miami and No. 27 Florida State. The Tigers face the Hurricanes on Friday, March 20 at 3 p.m. and the Seminoles on Sunday, March 22 at noon. Live scoring and Twitter updates will be available for Friday’s match. Sunday’s match will be broadcast live online on ESPN3. Live scoring will also be available.

The Tigers dropped a pair of matches last weekend to No. 7 Virginia and No. 15 Virginia Tech. On the season, Clemson is 9-8 overall and 0-3 in ACC play. Senior captain Hunter Harrington is ranked 91st nationally in singles this week. Junior Luke Johnson won both singles matches last weekend in Virginia. He and Harrington, Clemson’s No. 1 doubles duo, split their two matches over the weekend, and are 3-1 in their last four contests.

Scouting MiamiThe Hurricanes are 6-8 on the season and dropped their first two ACC matches this past weekend at No. 12 North Carolina and at No. 6 Duke. Miami boasts one nationally-ranked singles player this week, Piotr Lomacki is tabbed 74th by the ITA.

Clemson holds a narrow lead in the all-time series against Miami 26-25. The Tigers picked up their most recent win against the Hurricanes last season on March 7, a 6-1 result at Clemson’s Hoke Sloan Tennis Center.

Scouting No. 27 Florida StateThe Seminoles are 13-5 overall this season and 2-2 in ACC play. Florida State has played five consecutive matches against ranked opponents, and is 2-3 in those contests. Florida State boasts one nationally-ranked doubles duo and singles player this week. The team of Benjamin Lock and Marco Nunez are 30th nationally, while Michael Rinaldi is tabbed 79th in singles by the ITA.

Clemson holds the all-time series advantage with Florida State 19-18. Most recently, Clemson knocked off the Seminoles 5-2 in Clemson last season, on March 11.