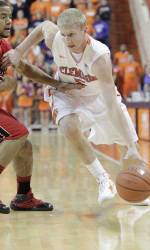 QUICK FACTS  Clemson and Iowa match up for the third time in series history on Tuesday, and for the first time in the Big Ten/ACC Challenge. The Tigers have an 8-4 all-time record in challenge games, while the Hawkeyes are 2-7.  The ACC has won 10 of the 12 challenges to date. This year’s challenge will mark the first time 12 games will be played, due to the addition of Nebraska to the Big Ten.  The Tigers enter the game with a 3-2 record, having defeated Furman last time out by a score of 59-49. It was the third time this season the Tigers held an opponent to 50 points or less. Clemson is 3-0 in such games.  The Hawkeyes are 4-2 on the season and won 82-72 over Indiana-Purdue Fort Wayne over the weekend. Iowa previously lost two straight to Creighton and Campbell.  Tuesday’s matchup features two second-year coaches who worked their way up from the mid-major coaching level. Clemson’s Brad Brownell spent four seasons apiece at UNC Wilmington and Wright State before coming to Clemson, while Iowa’s Fran McCaffery coached for 14 seasons at Lehigh, UNC Greensboro and Siena before heading to Iowa.  Since the start of the 2007-08 season, Clemson has compiled an 11-1 record in non-conference road games. That includes a 76-74 win at Illinois in the 2008 ACC/Big Ten Challenge.  Clemson has a 9-1 record under Brownell when holding the opposition to 50 points or less.  Milton Jennings established career highs in points (22), rebounds (14), minutes (37), field goals made (7) and free throws made (8) in the win over Furman on Nov. 25. It was his first double-double of the season and fifth of his career.  Jennings has scored double figures in four of the five games this season, and in seven of his last nine games overall.  Andre Young is second in the ACC with a 3.8 assist-to-turnover ratio and ranks third in Clemson history with a career 2.08 figure.  Tanner Smith is third in the ACC with 4.2 assists per game and has led or tied for the team lead in helpers in three of the five games overall.  Bryan Narcisse is tied for sixth among ACC players with 1.4 blocked shots per game, even though he is averaging just 15.8 minutes of playing time this season.