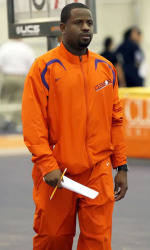 Clemson’s track & field teams will travel to Blacksburg, VA this weekend for the 2009 ACC Indoor Championships. The meet will be held at Rector Field House on the Hokies’ campus. The action gets underway Thursday at 12:00 noon and concludes Saturday afternoon with the 4x400m relay. Portions of the meet will be broadcast live on the Internet via ACC Select. Click on the links above or visit ACCSelect.com for more information.

This marks Clemson’s first conference meet under the watch of first-year Director of Track & Field Lawrence Johnson, who will be returning to Virginia Tech, a school where he served as an assistant coach from 2005-08.

The Tigers have several standout performers in both men’s and women’s events. Leading the way has to be two-sport standout C.J. Spiller, will compete Thursday and Friday in the event. Ford was the 2007 league champion in the 60m dash and owns the ACC’s overall and meet record in the event.

Ford is Clemson’s lone automatic NCAA qualifier from the men’s team. However, six other student-athletes own NCAA provisional qualifying marks in different events. Included in the list are three in the 60m dash, and George Fields (long jump), Chris Spear (pole vault), and Miller Moss (heptathlon). Moss will help kick off the competition Thursday at noon with the first four events of the heptathlon, which concludes Friday afternoon.

Liane Weber, a former ACC champion in the pentathlon, hopes to earn her second league championship in the five-event competition Thursday. Weber, the school record-holder, owns an NCAA automatic point total of 4,135 in the pentathlon.

Patricia Mamona and April Sinkler figure to be competing for top honors in multiple events this weekend. Mamona is entered in the 60m hurdles, long jump, high jump, triple jump, and pentathlon. She is a provisional NCAA qualifier in all four events. Sinkler will compete in all three jumps, beginning Friday.