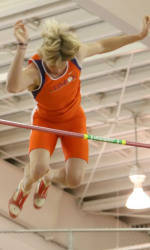 CLEMSON, SC – Clemson track & field will open the 2010-11 indoor season on Saturday at home by playing host to the Orange & Purple Winter Classic at the school’s indoor complex. The meet will get underway with field events at 11:00 AM and track events at 12:30 PM.

Clemson women’s track & field enters the season as the defending ACC champions, both indoor and outdoor. However, the indoor season will feature a younger women’s team at Clemson due to the expired eligibility of returning All-Americans Michaylin Golladay, Patricia Mamona and Liane Weber. All three will be eligible beginning in March for outdoor season.

April Sinkler returns as a standout for the women’s team, but she is entered in only track events this weekend. She is the defending ACC champion in both the high jump and long jump.

Brianna Rollins and Stormy Kendrick – reigning ACC Indoor and Outdoor Freshman-of-the-Year, respectively – also return for the women’s team. Rollins is still recovering from a back injury that forced her to red-shirt the 2010 outdoor season. Kendrick is coming off an outstanding offseason in which she won IAAF World Junior championships in the 200m dash and 4x100m relay.

The men’s team returns All-Americans in Spencer Adams and Miller Moss. A two-sport athlete, Adams will join the track squad following Clemson’s football bowl game. Moss was an All-American in the heptathlon last season, and he is slated to compete this weekend for the Tiger men’s team in multiple events.