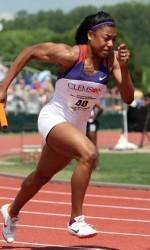 CLEMSON, SC – The Clemson track & field teams will play host to a total of 15 schools on Friday and Saturday at the Orange & Purple Classic, the final home meet of the 2010 season for the Tigers. Friday’s action gets underway at 5:00 PM, while Saturday’s events are scheduled to start at 10:00 AM.

Clemson will have a number of 2010 track & field graduates competing this weekend. A total of 11 current student-athletes, in addition to three former track & field team members, will graduate in Friday’s commencement ceremonies at Littlejohn Coliseum. Former All-ACC athletes Caroline Kennedy, Chris Spear and Bethanie Wachna are among the group, as well as versatile women’s standout Michaylin Golladay.

Several standout performers will compete for the Tiger teams on Friday. The first event is the women’s discus at 5 PM, featuring freshman Brittney Waller. The women’s long jump will also kick off at the same time.

On the track, Kim Ruck highlights Clemson’s entries Friday evening in the women’s 5K at 6:55 PM. Chris Slate and Jasen Turnbull will compete in the men’s 800m invitational at 7:50 as well.

Saturday will feature a full slate of action, including relays for local elementary school children. The first collegiate events will be the men’s javelin and women’s shot put at 10 AM. The first collegiate track event is the women’s 4x100m relay at 12:00 PM. Clemson’s women will be back in action at the facility where the Tigers hoisted the ACC crown just a few weeks ago.

Spencer Adams is scheduled to return to his first track action since straining his hamstring in the 4x400m relay, the final event of the ACC Outdoor Championships. He will compete against a host of Tigers in the 110 hurdles at 1:15.

In the field, several new graduates will be in action on Saturday. Wachna, ACC runner-up in the javelin, will compete at 11 AM. Kennedy, All-ACC competitor in the women’s pole vault, goes off at 12 PM. Spear follows in the men’s pole vault at 1 PM.