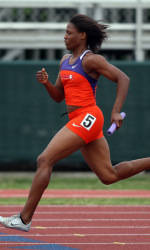 CLEMSON, SC – The Clemson track & field program had 10 first-team All-Americans at the NCAA Outdoor Championships, according to the official list released Tuesday by the U.S. Track & Field and Cross Country Coaches Association. The Tigers had a total of 15 first- and second-team performers across the men’s and women’s programs.

The Clemson women’s team, which finished in a tie for fourth place, had nine first-team All-Americans. Marlena Wesh accounted for two of the honors after finishing sixth in the 400-meter dash and helping the 4×100-meter relay to a third-place finish. She was joined on the relay by Stormy Kendrick, Dezerea Bryant and Jasmine Edgerson.

It was the third straight year Edgerson was named a first-team All-American with the 4×1, and the second such selection for Kendrick. Combined with a pair of first-team honors during indoor season, freshman Bryant ended her rookie campaign with three All-America certificates in 2012.

The Tiger women’s team had four second-team All-Americans, including freshman Keni Harrison in both hurdle events, Bryant in the 200 dash, and Monique Gracia in the 100 hurdles.

From the Clemson men’s team, Spencer Adams was a first-team All-American for the second time in 2012. He finished with the bronze medal in the 110 hurdles last weekend, an individual high for the junior from Charlotte, NC. In addition, Warren Fraser was a second-team selection after finishing 13th overall in the 100-meter dash with a career-best time of 10.18.