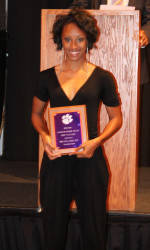 Members of the track & field coaching staff and the program’s support staff chose the awards winners. The complete list of winners is below.

Ty McCormack and Kim Ruck were the team MVPs for the 2010 cross country season. Ruck advanced to the NCAA Championships as an individual that fall. Miller Moss and Brianna Rollins, who won NCAA titles in the heptathlon and 60 hurdles, respectively, were named indoor MVP winners. The outdoor MVPs were Justin Murdock, who qualified in four different NCAA events, and Patricia Mamona, who won her second straight NCAA triple jump championship.

The coaches award recipients were given to student-athletes that consistently went above and beyond their ability for the good of the team. La’Mont Jackson and Cory Thalheimer were awarded the honor for the men’s team, while Kulik and April Sinkler won coaches awards for the women.

Strength & conditioning awards were also presented to student-athletes that excelled in training. Jasen Turnbull and Kim Ruck won the awards for cross country season, while Miller Moss and Liane Weber, both multiple-time All-Americans on the track, took home strength awards for track & field.

One of the most special awards of the night was presented in honor of Barbara Kennedy-Dixon, the team’s former athletic supervisor. The award goes to an athlete that excelled under pressure. Michaylin Golladay, an outdoor All-American in two events and a Clemson graduate, was the 2010-11 Barbara Kennedy-Dixon “Invictus” Award recipient.