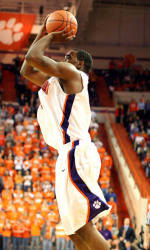 RALEIGH, N.C. (AP) – K.C. Rivers scored five of his 17 points during the game-deciding run, and Clemson held North Carolina State scoreless during the final 2 1/2 minutes of its 71-64 victory Saturday.

Terrence Oglesby and Trevor Booker both scored 11 points and Rivers added 10 rebounds for the Tigers (19-6, 7-4 Atlantic Coast Conference), who blew a 13-point lead, then closed the game with a 12-2 run that erased the Wolfpack’s only lead of the second half.

Oglesby answered 30 seconds later with a 3-pointer over Grant from the left wing that put Clemson ahead to stay, Rivers added a jumper and the Tigers hit 4-of-7 free throws in the final minute to seal their third straight win in the series and second consecutive victory this season.

Grant had 18 points, Fells scored 17 and J.J. Hickson finished with 13 points and a season-high 23 rebounds for N.C. State, which on its final six possessions had three turnovers and missed all three of its shots – most noticeably, Hickson’s attempted dunk with about 23 seconds left that was rejected at the rim by Sam Perry.

N.C. State, which has lost three straight to fall into the bottom third of the ACC, unexpectedly made it a game in the second half. Coach Sidney Lowe’s team struggled through a brutal first-half stretch that included 13 straight missed shots and 10 minutes between field goals.

Clemson erased N.C. State’s early lead with an Oglesby-keyed 22-3 run that put the Tigers up by 13. The freshman guard gave the Tigers the lead for good by knocking down three straight free throws with about 12 minutes left before halftime, drained a 3-pointer from the left wing and capped the burst with two foul shots that made it 27-14.

At the other end of the court, the Wolfpack couldn’t seem to hit anything, missing all nine of their attempts from 3-point range in the half. Hickson ended the frustration by following the team’s 13th straight miss with a dunk with 5:20 left in the half.