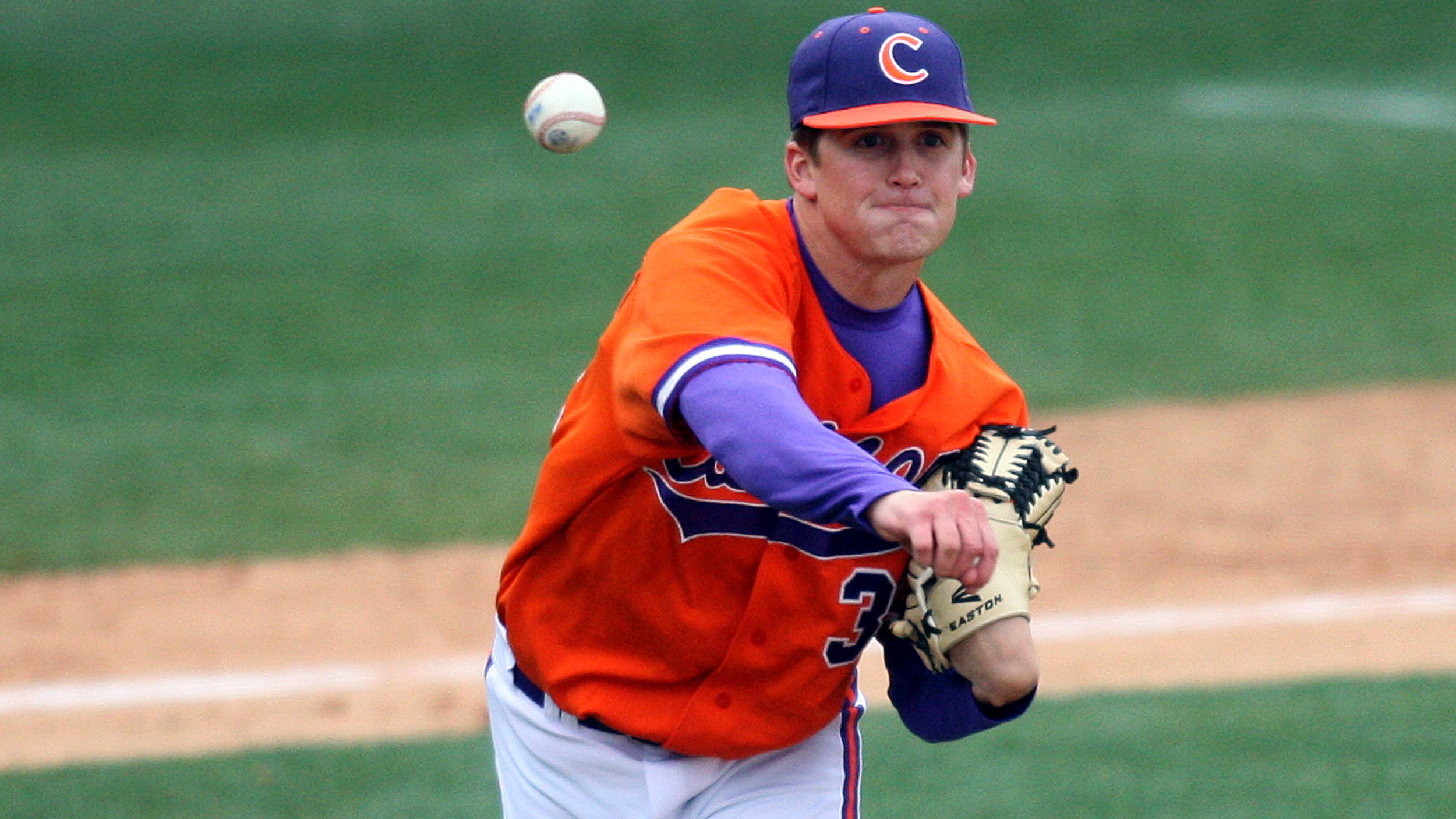 Clemson vs. WoffordClemson (6-4) will host Wofford (7-5) on Wednesday at Doug Kingsmore Stadium. First pitch is scheduled for 4:00 PM. The game will be available live via webcast on TigerCast at ClemsonTigers.com. The game will also be broadcast live on the radio by WCCP (104.9 FM) out of Clemson. Live stats will be available at ClemsonTigers.com as well.

The SeriesClemson and Wofford have met 100 times, with the Tigers holding a 76-23-1 lead in the series dating to 1898. Clemson has won 13 games in a row in the series, as the last Terrier win came in 1949 in Spartanburg, SC.

The two teams last met on March 2, 2011 at Doug Kingsmore Stadium. The Tigers were victorious 5-1, as Clemson broke a 1-1 tie with two runs in the fifth inning.

The Starting PitchersWofford will start sophomore lefthander Dominick Del Monte (0-1, 21.60 ERA) on the mound. The Clearwater, FL native has made two relief appearances and one start for a total of 3.1 innings pitched. He has yielded nine hits (.474 opponents’ batting average) and four walks with three strikeouts.

The Tigers will counter with freshman lefthander Matthew Crownover (0-0, 7.36 ERA) on Wednesday. The Ringgold, GA native has made one start and one relief appearance for a total of 3.2 innings pitched. He has surrendered three hits (.231 opponents’ batting average) and two walks with four strikeouts.

The TerriersWofford, led by sixth-year Head Coach Todd Interdonato, enters Wednesday’s game at Clemson with a 7-5 overall record after winning three of four games at home over the weekend against Dayton (1-1) and Marshall (2-0). The Terriers, who are 0-1 on opponents’ home fields, have lost three one-run games and one two-run game in 2013.

Wofford is averaging 6.0 runs per game and hitting .291 with a .407 slugging percentage and .395 on-base percentage thanks to 52 walks and 13 hit-by-pitches against 75 strikeouts. The team has also totaled 25 doubles, three triples, four homers, 17 sacrifice bunts, and 44 stolen bases in 56 attempts.

Josh Hyman is hitting .435 with six doubles, two triples, one homer, 10 RBIs, 16 runs, and five steals. Eric Brenk is batting .366 with two homers, 14 RBIs, and five steals, while Alec Paradowski is hitting .343. Seth Neely, who red-shirted at Clemson in 2010 before transferring to Spartanburg Methodist College, is hitting .326 with six steals as well.

The pitching staff has a 4.72 ERA and .275 opponents’ batting average along with 92 strikeouts against 57 walks in 101.0 innings pitched. Junior righthander Eric Eck has both of the team’s saves and has allowed just three hits, no earned runs, and one walk with seven strikeouts in 6.1 innings pitched over five relief appearances. Wofford, who has allowed 27 steals in 37 attempts, is fielding at a .928 clip as well.

The TigersClemson enters Wednesday’s game against Wofford with a 6-4 overall record after falling twice in three games against #7 South Carolina over the weekend. Clemson owns a 5-3 record at Doug Kingsmore Stadium.

The Tigers are averaging 4.2 runs per game and hitting .243 with a .316 slugging percentage and .305 on-base percentage thanks to 25 walks and five hit-by-pitches against 66 strikeouts. Clemson has also totaled 18 doubles, two homers, and 10 stolen bases in 14 attempts.

The pitching staff has a 2.27 ERA and .233 opponents’ batting average in 91.0 innings pitched. The staff has allowed 34 walks against 73 strikeouts, good for a 2.15 strikeout-to-walk ratio.

Junior righty Matt Campbell has all three of Clemson’s saves. The Tigers are fielding at a .978 clip as well.

Righty RotationClemson’s weekend rotation of sophomore Daniel Gossett (Friday), freshman Clate Schmidt (Saturday), and senior Scott Firth (Sunday), all righthanders, has been a bright spot for the Tigers in 2013. All three have an ERA of 1.32 or better. The trio has combined for a 5-2 record, 1.03 ERA, 38 strikeouts against 15 walks in 52.2 innings pitched over nine appearances (eight starts). They are a big reason Clemson has allowed three earned runs or less in nine of its 10 games along with team’s 2.27 ERA in 2013.

Schmidt Working For the WeekendFreshman righthander Clate Schmidt (Acworth, GA) is one of many highly-touted newcomers who has made a big impact in 2013. He made his first career appearance out of the bullpen when he faced William & Mary on February 16, but he has since moved into the weekend rotation, a rare feat for a freshman.

Against #7 South Carolina at Fluor Field in Greenville, SC on March 2, he tossed 7.0 strong innings to earn the win. He gave up just five hits, two runs, and three walks with five strikeouts in the Tigers’ 6-3 victory. For his efforts, he received the Bob Bradley Award as Clemson’s MVP of the three-game series with the Gamecocks. He became the first freshman to win the award since 2007 and the first pitcher to win the award since 2006.