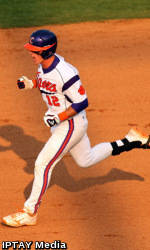 Clemson will face Coastal Carolina in the first round of the NCAA Baseball Tournament in Columbia, SC on Friday at 12:00 PM. The Tigers are the #2 seed in the regional, while Coastal Carolina is the #3 seed. The game will be televised live by ESPNU.

It will be the opening game of the regional that will be held at the home ballpark of South Carolina. The four-team, double-elimination tournament will also have top-seeded South Carolina face #4-seeded Manhattan. The regional will continue through Monday, June 4.

This is Clemson’s 37th appearance in the NCAA tournament, the fifth-most appearances in the history of college baseball. Clemson has been to the NCAA Tournament every year but one since 1987. Clemson’s NCAA history includes 12 trips to the College World Series, six under current Head Coach Jack Leggett and six under his predecessor, the late Bill Wilhelm.

Clemson’s upcoming meeting with Coastal Carolina will be the second meeting between the two teams this year. The Chanticleers defeated Clemson 10-7 at Clemson on April 24. Coastal Carolina committed five errors, including four in one inning, but still won the contest thanks to four runs in the top of the eighth inning.

Clemson has a 40-8 lead in the all-time series with Coastal Carolina. The two teams have played at least once every year since 2007. That year, they met twice in the NCAA Regional at Myrtle Beach and Clemson won both contests, 11-8 and 15-3. The 15-3 victory advanced Clemson to the Super Regional at Mississippi State.

Head Coach Gary Gilmore’s team has a strong pitching staff. In fact, it was first in the nation in ERA entering last week’s conference tournaments. The staff has a 2.53 ERA and has allowed just 7.4 hits per nine innings, one of the top-10 figures in the nation.

Aaron Burke, who defeated Clemson in the previous meeting this year, has a 10-5 record with a 1.18 ERA, the second-best ERA in the nation. He has allowed teams to hit just .238 off him in 76.1 innings pitched. Ryan Connolly, the winning pitcher for Coastal Carolina in their clincher in the Big South Conference Tournament last Saturday, has a 5-2 record as a reliever. Tyler Herb has an 8-2 mark with a team-high 65 strikeouts.

Clemson enters the NCAA Tournament with a 33-26 record, including three wins over Florida State when the Seminoles were ranked #1 in the nation. It is the most wins over the #1 team in one season in any sport in school history. Overall, Clemson has 14 wins over top-50 teams in the RPI and the Tigers have beaten seven different teams who are in the NCAA Tournament, including five NCAA teams multiple times. Clemson’s schedule is rated #6 in the nation as well.

Clemson boasts a 3.94 team ERA. Three Tigers have six wins apiece, freshman Daniel Gossett (6-3), sophomore Kevin Pohle (6-4), and junior Dominic Leone (6-4). Gossett and Pohle each earned their sixth wins against top-ranked Florida State in mid-May. Kevin Brady, who has been limited by a groin injury of late but did pitch in relief in the ACC Tournament, leads the team in ERA among the starters with a 2.52 mark. Scott Firth has appeared in 22 games, all in relief, and has a 4-0 record along with a 1.99 ERA.

Second-baseman Steve Wilkerson is second on the team with a .308 batting average , while centerfielder Thomas Brittle has a .303 batting average with eight triples, one of the top-10 figures in the nation, and a team-high 11 steals. Phil Pohl, a finalist for the Lowe’s Senior Class Award, is hitting .288 and has eight home runs along with a team-high 50 RBIs.

This will be the first time Clemson has travelled to Columbia for a regional since 1976, when the Tigers won three straight games under Bill Wilhelm to advance to the College World Series. The Tigers defeated South Carolina once and Furman twice at that regional.

Manhattan has a 33-25 record entering the NCAA Tournament, including an 18-0 ledger at home. It won the MAAC championship in thrilling fashion last weekend. After losing the first game against Rider, Manhattan won four straight games, all by one run, including each of the last two against Canisius in extra innings.

Manhattan is led at the plate by Anthony Vega, who has a .336 batting average with five home runs and 31 RBIs. Taylor Sewitt has an 11-1 record as the top pitcher with a 2.40 ERA. His win total is among the top five in the nation.

Clemson will receive a very limited ticket allotment that will be used for Clemson player guests. Any tickets that are available for purchase will be sold through the host site. Tickets may be purchased from the South Carolina Athletic Ticket Office by calling 1-800-472-3267 or online at GamecocksOnline.com.

On playing in the Columbia Regional: “You can’t discount any of the other teams in the regional. You have to play through the whole thing. You have to take it one game at a time and you can’t look past anybody, or you’re going to find yourself in a hole really quickly.”

On team’s mindset: “We can’t look past Coastal Carolina. We have to stay in the moment and play one game at a time. It would be a huge mistake to look any further than that. We have to focus on Coastal Carolina during practice today and tomorrow and get ready to play at our best on Friday.”