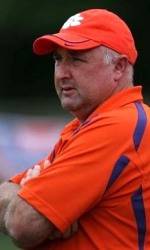 Clemson To Play Boston College in the ACC Tournament

The Tigers are now 7-8-2 overall, while Boston College is 9-6-2 this season. Clemson is led in scoring by Michael Brooks with six goals and one assist for 13 points. Hassan Ibrahim is the Tigers’ second leading scorer with four goals and four assists for 12 points.

This will be the fifth meeting between Clemson and Boston College on the soccer field. Clemson leads the overall series 2-1-1. The Tigers and Eagles first met in 2005.

Current Tigers and seniors Michael Brooks are two Tigers that have scored in ACC Tournament play. Moore scored a goal in the Tigers’ 4-1 win over Virginia in the 2005 quarterfinals. Brooks scored last year in the quarterfinals in the Tigers’ 3-1 loss to Wake Forest.

In the history of the ACC Tournament, the Tigers have now been seeded sixth a total of seven times. In 1992, the sixth-seed Tigers defeated third-seeded Duke and tied second-seeded N.C. State in the semifinals. However, the Tigers won the penalty kick round to advance to the finals. Virginia defeated Clemson 4-2 that season in the ACC Tournament finals.

“Obviously, having played them recently, they are fresh on our minds,” said Clemson Head Coach Trevor Adair. “They are a solid team with lots of experience. The neutral site will take away their advantage of playing on sports turf that we played on at their place in Boston. We are fighting for survival, and we can’t leave anything on the field.”