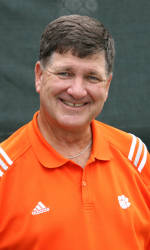 The Tigers’ matches Thursday against 18th-ranked LSU and Southern University were cancelled due to rain. The matches will not be rescheduled this season. LSU is the only school in the Southeastern Conference without an indoor tennis facility.

Clemson and Alabama will be playing for the 15th time in a series that began in 1941. The Crimson Tide leads the overall series 10-4.

Clemson currently has a 7-4 record overall this season.