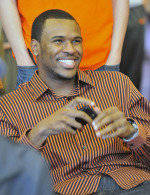 Watch all Tiger games from the NCAA® Championship LIVE ONLINE for FREE!

CLEMSON, SC – Clemson (21-10) will face Missouri (22-10) in a battle of Tigers in the first round of the NCAA Tournament on Friday, March 19 at the HSBC Arena in Buffalo, NY. Tip time for the contest will be announced later. The winner of the Clemson vs. Missouri game will face the winner of the West Virginia vs. Morgan State game on Sunday.

This is Clemson’s third consecutive NCAA Tournament appearance, just the second time in school history the Tigers have been selected for three straight tournaments. The only other time it has been done at Clemson was in the 1996-98 era. Clemson is one of 21 schools in the NCAA Tournament for a third straight year.

This will be just the third meeting between Clemson and Missouri, the first since 1996-97. Missouri defeated Clemson in Honolulu in the December of 1986 Rainbow Classic by a 69-64 score. The Missouri win ended an 11-game winning streak to start the season for the Tigers. Clemson then defeated Missouri in Puerto Rico in November of 1996 by a 47-45 score at the San Juan Shootout.

Clemson is led in scoring by first-team All-ACC forward Trevor Booker who has a 15.3 scoring average and an 8.3 rebound average. He also shoots 52.3 percent from the field, third best in the ACC. Booker has 1,714 career points and 1,049 career rebounds, one of just six active players at the Division I level with at least 1,500 points and 1,000 rebounds.

Demontez Stitt runs the point for the Tigers. The junior from Mathews, NC averages 11.1 points and has a team best 92 assists. Like Booker he will be playing in his third consecutive NCAA Tournament. Two years ago he made 4-4 three-point shots and scored 12 points against Villanova.

Lawrence Bowers is a third double figure scorer for the Missouri Tigers. The 6-8 forward from Memphis scores 10.2 points per game and is second on the team in rebounding with a 5.6 figure. Keith Ramsey is the top rebounder on the team with a 5.7 figure. He is a 6-9 senior from Murfreesboro, TN.

Both lost their final regular season game, then lost in the first round of their respective conference tournaments. But, both teams were playing well prior to that and have a 6-4 record over their last 10 games. Clemson has a 6-6 record against teams in the NCAA Tournament and Missouri is 4-7 against the field. Clemson had an RPI of #34 and Missouri was at #45.

Clemson Head Coach Oliver Purnell was pleased his team was selected as a number-seven seed for the Tournament. “I think it speaks to the body of work we’ve had this season, and the respect the tournament committee has for our league. We have played a strong schedule and have some outstanding wins, including six wins over teams in the tournament and five ranked in the top 50 of the RPI, including four in our last 10 games.

“I haven’t seen Missouri a lot in the past, but they certainly love the up-tempo game and pressure defense. They love to get up and down the floor just like we do so it could be an entertaining matchup.”

On being selected for the NCAA Tournament three straight years: “It’s a great feeling to be selected to the NCAA Tournament for the third time in a row. Of course, there will be people that talk about us and say a repeat of the past will happen. Like Coach Purnell always says, we have a chance to write our own script. It’s a new start for everybody, for all the teams that were selected today. Everybody’s 0-0 right now. The main thing for us to be successful is to come out and play Clemson basketball.

We don’t know much about Missouri, but that shouldn’t affect the way we prepare as a team.”

On what he knows about Missouri: “I know they (Missouri) like to press. That’s the only thing we know, really. I feel good about the matchup; we go against that style of play every day in practice.”

On feelings prior to Selection Sunday: “I knew we were in; it was just a matter of what seed we would get. I thought we would be anywhere from an 8 to a 10 seed, but we’ll definitely take a 7 seed. I was kind of shocked, realistically. It showed that our hard work is paying off, and now we’ve got a chance to show people we can make some noise in the tournament.”

On what he knows about Missouri: “They play a style very similar to ours. They play really fast, so it’s going to be fun. I’ve seen a glimpse of one of their games, but I pretty much know their style of play based on what other people have said about them.”

On preferring to play up-tempo teams: “It allows you more opportunities, offensively and defensively. I like to play fast, that’s more of my preferred style.”

On the Tigers receiving a 7 seed: “I didn’t think we would be as high as a 7 seed, but we’ll definitely take it.”