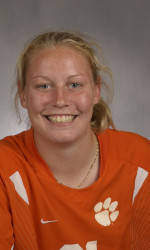 LiveStats will be available for Friday’s game and can be viewed by selecting the GameTracker link at the top of the page. Florida State will be airing the game on the radio and the broadcast can be heard by choosing the appropriate link above.

Clemson has a 11-7-5 record overall this season. The Lady Tigers are ranked 21st by the NSCAA and 25th by Soccer America. In the soccerbuzz.com poll, Clemson is ranked 23rd.

Florida State has a 17-3-4 record overall and the Seminoles are ranked fifth by the NSCAA and soccerbuzz.com polls. In the Soccer America listing, Florida State is ranked seventh.

Meghan Smith and Julie Bolt both have five goals and five assists for 15 points each to lead the Lady Tigers.

Ashley Phillips, Clemson’s goalkeeper, has 114 saves this season and has nine solo shutouts and a 0.92 goals allowed average.

Clemson has an 8-11-5 record in the NCAA Tournament since Clemson first fielded a women’s soccer team in 1994.

This will be the 17th meeting between Clemson and Florida State in women’s soccer. The series is tied 7-7-2. This match also marks the third meeting between these two schools in NCAA Tournament action with the Lady Tigers winning the previous two at Riggs Field in Clemson, SC 2-0 in 2000 and 1-0 in 2001. The Seminoles and Clemson played to a scoreless tie in Tallahassee on October 27 this season. Florida State was ranked sixth at that time.