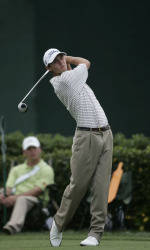 Clemson, SC-Clemson Head Coach Larry Penley will take a young team to the ACC Tournament this weekend at The Old North State Club at Uwharrie Point, NC. Clemson will not have a senior in its lineup and will have four freshmen and sophomores among the five-player lineup.

The 54-hole event will be played on the par 72 course Friday through Sunday. Clemson has won the ACC Championship nine times in its history, including eight championships under Penley. Clemson last won the tournament in 2004 and has finished in the top four in 12 consecutive ACC Tournaments.

This will be the 11th ACC Tournament held at the Old North State Club. Clemson has won four of the previous 10 tournaments held at the site, winning titles in 1998, 2000, 2003 and 2004. Clemson has played 30 rounds in 10 tournaments there and has had 18 under-par team rounds on the course, including a school record 20 under par 268 last year.

A pair of freshmen will be in the lineup this weekend. Kyle Stanley is Clemson’s top golfer so far this year with a 71.57 stroke average. He is ranked 12th in the nation in the latest Sagarin/Golfweek rankings. He has three top 10 rankings and seven top 20s, including medallist honors at the Aloha Purdue Collegiate in November.

Sam Saunders is a second first-year freshman who will be in the 10th ranked Clemson lineup. He has a 74.17 stroke average so far this year for 18 rounds and has a pair of top 10 finishes. He is the grandson of legend Arnold Palmer, the first ACC men’s golf champion in 1954 when he was a student at Wake Forest.

Phillip Mollica and David May are a pair of sophomores who will be playing for Clemson this weekend. Mollica, a native of Anderson, SC, has a 74.27 stroke average this year. He has scored 75 or better in 12 of his 15 rounds so far this year. May has a 74.57 stroke average for the year. He finished ninth at the ACC Tournament last year as a freshman when he finished with a 211 score. His tournament included a career best 65 in the second round, the second best round in Clemson history in an ACC Tournament.

Tanner Ervin is the elder statesman of the Clemson lineup. The junior from Mount Pleasant, SC has a 74.39 stroke average for six events this year. He is coming off a 16th place finish at the US Collegiate when he had a 224 score for 54 holes. He finished eighth at the Puerto Rico Classic in February.