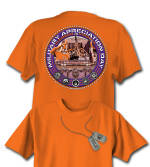 Clemson to Celebrate Military Appreciation Day on November 21 vs. Virginia

CLEMSON, SC – On Saturday, November 21, the Clemson University Athletic Department will recognize and honor our fallen soldiers, veterans and current military personnel serving in our armed forces during pre-game and halftime ceremonies of the Clemson vs. Virginia football game. Kickoff has not been determined at this time. This year’s Military Appreciation Day will be presented by the United States Marine Corps Officers Programs.

Various military displays will be held on Bowman Field beginning at 9:00 AM.

Pre-Game Concert and Parade: All fans, veterans and current soldiers from both schools are invited to a pre-game concert by the Clemson University Tiger Band 90 minutes prior to kickoff in the amphitheater located in front of Cooper Library. Veterans and current soldiers can participate in a parade to the stadium through the Clemson campus. Line-up is 75 minutes prior to kickoff outside the Holmes and McCabe dormitories located on Fort Hill Street. The parade will begin one hour prior to kickoff and will end at Gate 9 of Memorial Stadium.

Pre-Game Festivities: Dotting the “i” will be members of the Clemson University Senior Platoon.

The presentation of colors on the field will be by the Unites States Marine Corps color guard.

The Unites States Marine Corps Officers Programs will provide the fly-over at the conclusion of the National Anthem.

The South Carolina National Guard designed the coin that will be used in the pre-game coin toss. The commemorative coin has 78 stars in honor of the 78 soldiers killed from the State of South Carolina in the war in Afghanistan and Iraq.

Halftime Festivities: All veterans and current soldiers from both schools are invited to participate in halftime ceremonies by gathering outside the stadium behind the East end zone scoreboard with five (5) minutes remaining in the second quarter. Everyone must have their hand stamped prior to exiting the stadium so they can gather between the scoreboard and the Scroll of Honor Memorial located across the street from Memorial Stadium.

Halftime ceremonies will feature: the parade of veterans and current soldiers onto the field by walking down “The Hill,” the introduction of families of fallen soldiers from the State of South Carolina, the placement of a wreath, helmet and boots to signify the fallen soldier, a 21 gun salute by the Clemson University Company-C-4 Pershing Rifles, the playing of “Taps” and Armed Forces Service medley by the Clemson University Tiger Band.

Commemorative T-Shirt on Sale: Clemson fans have the opportunity to take part by purchasing this year’s Military Appreciation Day t-shirt. A portion of the proceeds from the sale of the shirt will go towards the ROTC programs at Clemson University.

“Scroll of Honor” Posters: 5,000 – 11″x11″ “Scroll of Honor” posters will be distributed to the Clemson University dormitory rooms prior to the Virginia game. The posters list the 468 Clemson men who have made the ultimate sacrifice during all wars. The lone Star on the front of the poster is in honor of these Clemson heroes.

During the early days of World War I, a Blue Star was used to represent each person, man or woman, in the Military Service of the United States. As the war progressed and men were killed in combat, others wounded and died of their wounds or disease, there came about the accepted usage of the Gold Star.

Tickets: Tickets for the Clemson vs. Virginia football game can be purchased online at www.clemsontigers.com, by phone at 1-800-CLEMSON or in person at the Clemson Athletic Ticket Office from 8:00 AM to 4:30 PM Monday through Friday.