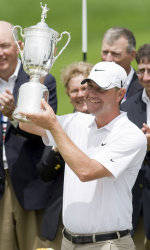 Clemson Tied for Second in Representatives in US Open

CLEMSON, SC – Four former Clemson golfers will participate in the 2012 US Open at The Olympic Club in San Francisco, CA this weekend. Play begins on Thursday on the course that has been the site of the US Open four times previously.

Former Tigers in the field include Jonathan Byrd, Lucas Glover, Kyle Stanley and Tommy Biershenk. Clemson is tied for second for the most former players in the field. Oklahoma State has the most representatives with eight, while Clemson, Arizona State and Georgia Tech are tied for second with four apiece. Georgia, Illinois and Stanford have three players apiece.

The ACC has the most former or current players in the field with 18. Eight ACC institutions have at least one representative, more than any other league. The Big 12 is second with 15, the Pac 12 is third with 14, and the SEC is fourth with 10.

Byrd has been one of the top players on the PGA Tour the last month with four consecutive top 12 finishes. He is now 29th on the PGA money list with $1,464,320 and has moved up to #44 on the World rankings, 20th among American players. He has five top 10 finishes for the year, tied for first on the PGA Tour. He finished 27th at The Masters in his first major of the year.

Lucas Glover is one of 10 past US Open Champions in the field, as he won the 2009 event at Bethpage Black in New York. Glover has played well in the US Open recently as he is one of just nine players in the field who have made the cut each of the last three years.

Kyle Stanley is 16th on the PGA Tour money list this year with $2,022,213 earned. He won the Waste Management Open in Phoenix earlier in the year and also finished second at the Farmer’s Insurance Open in San Diego. He is ranked 56th in the World Golf Rankings this week.

Tommy Biershenk is the fourth former Tiger in the US Open. Biershenk is a 39-year old rookie on the PGA Tour and qualified for the US Open by shooting nine under par at the qualifier in Memphis last week. He has played in 15 events and made seven cuts this year.

Byrd and Glover were teammates at Clemson between 1998-00 and were starters on three Clemson teams that finished in the top eight in the nation. Stanley finished second at the NCAA Tournament in 2007 and 2009, the only Clemson golfer to finish runner-up twice. Biershenk played from 1992-96 and was a member of four Clemson NCAA Tournament teams.