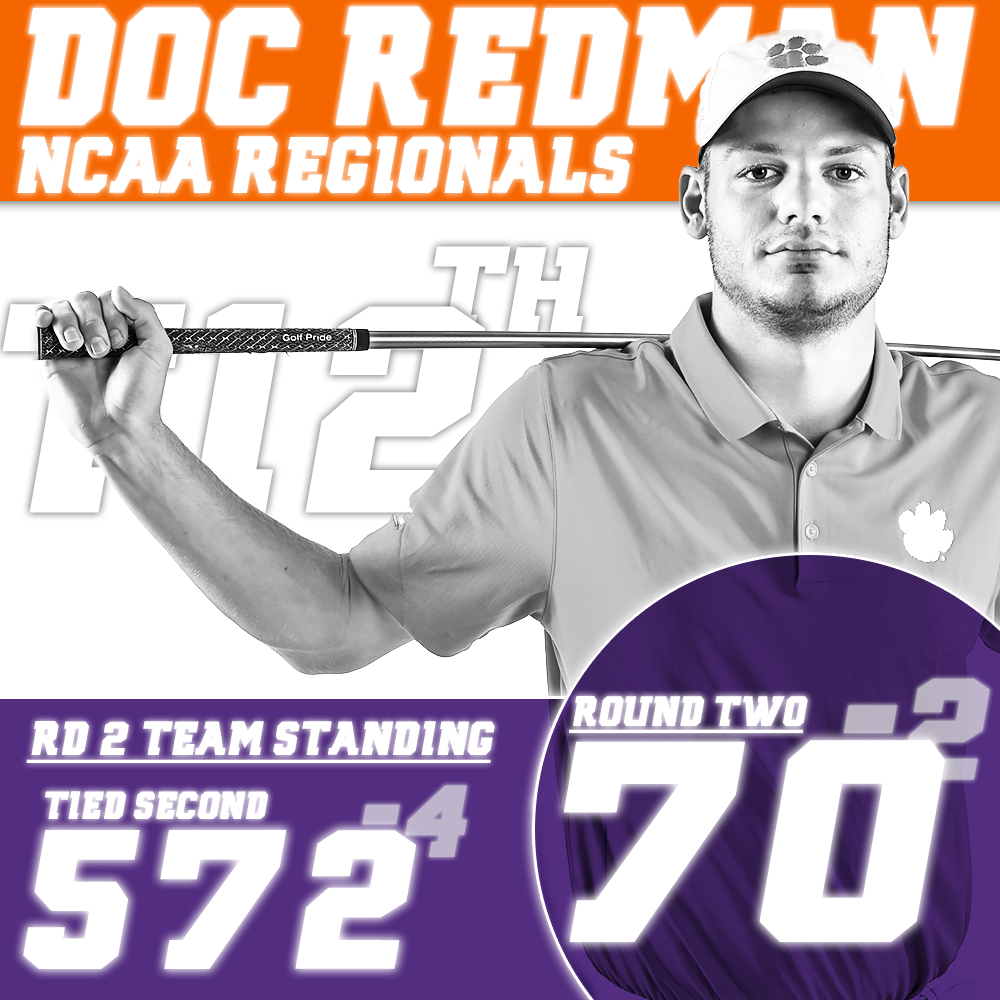 Clemson, S.C—Four Clemson golfers shot even par or better on Tuesday to lead Clemson to a 284 team score and a tie for second place after two rounds of the 13-team College Grove Regional of the NCAA Men’s Golf tournament.   The final round will be held on Wednesday and the Tigers must finish in the top five to advance to the NCAA national Tournament at Rich Harvest Farms in Sugar Grove, Illinois on May 26.

While Clemson is in a tie for second, the Tigers are just six shots ahead of the cutline entering the final round. Vanderbilt ranked second in the nation, has the lead at 564 12-under-par, while Clemson, Lipscomb, and Central Florida are all tied for second at 572. Kennesaw State is fifth at 575 and Troy is sixth at 578. Georgia and host school Middle Tennessee State are tied for seventh at 586.

Freshman Doc Redman had the best score for the Tigers on Tuesday with a two under par 70. The rookie from Raleigh got off to a birdie-birdie start and later had a streak of 10 consecutive pars before finishing with a birdie on the last hole when he made a 10 foot uphill putt. Redman stands in 12th place after 36 holes with a sore of 143.

Nimmer is in third place after 36 holes with a seven-under-par score of 137.   He trails Dawson Armstrong of Lipscomb, who had a course record 65 on Tuesday and is now at 10 under par 134 after two rounds, and Patrick Martin of Vanderbilt, who is at 135.

Nottingham had a clutch round of 71 as he was the only Tiger to finish with birdies on the 17th and 18th holes.   The only Clemson player in the lineup from Tennessee, Nottingham stands at even par 144 and is in a tie for 16th place entering the final round.

Senior Carson Young birdied the final hole to finish at even par 72 and is at four-over-par 148 for the first two rounds.   It was the 49th career round at par or better for the native of Pendleton, who graduated last week. Austin Langdale had an 81 on Tuesday, but played the last five holes in even par.

Overall, Head Coach Larry Penley was pleased with his team’s performance. “Making four birdies on the last hole was big,” said Penley, who has taken Clemson to the NCAA Tournament all 34 years he has been Clemson head coach. “The freshmen (Doc Redman and William Nottingham) have played well all year so that was not a surprise to me.

“Tomorrow we have to get off to a good start and we have to be patient. We can’t make big numbers either. We counted a triple bogey on Monday and two doubles today.   We might not get away with that in the final round as you can see how bunched the field is.   This is a long, tough golf course. “

Notes: Clemson wore NIKE golf shirts that had numbers on the sleeves for the first time in history.   Nottingham wore No. 13 and his clutch performance on the last two holes and that performance was not lost by Clemson fans aware he had the same number as Clemson football player Hunter Renfrow, who scored the winning touchdown with one second left in the National Championship football victory against Alabama….other numbers worn by Clemson players included Doc Redman (8), Austin Langdale (3), Carson Young (10) and Bryson Nimmer (7)….Penley wore 14 and assistant coach Jordan Byrd wore #11….Clemson played the last two holes at five-under-par, including counting four birdies on the 18th hole, the only team in the field to do that…Clemson had just one birdie as a team from holes 9-15, but had five birdies on holes 17 and 18…Nimmer’s double bogey on the 15th hole broke a streak of 28 straight holes without a bogey for the Clemson sophomore.