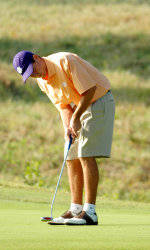 Clemson, SC–Kyle Stanley and Ben Martin both had second round scores of 68 to lead Clemson to a 283 team score on Saturday at the 55th Atlantic Coast Conference Tournament. The Tigers improved by a shot over their opening round 284, but dropped in the standings to a tie for fifth place entering the final round. The final round of the 54-hole event will be held on Sunday at The Old North State Club in New London, NC.

Duke has a 19-under par team score through two rounds to lead the 11-team field, 10 shots ahead of the Tigers, who have finished in the top four of this tournament every year since 1995. Florida State is second at 18 under par. NC state and Wake Forest, who both played with Clemson on Saturday, shot seven-under par for the round and stand tied for third at 11-under par for the tournament.

Clemson played the par five 18th hole in two-under par, while NC State and Wake Forest played it in five-under par. That one hole was the difference between Clemson ranking third and fifth entering the last round. Clemson and North Carolina are tied for fifth at nine under entering Sunday.

Stanley and Martin both had consistent performances in firing their respective four under par rounds. Stanley was four-under for his first six holes. He made his only bogey of the day on the ninth hole, then birdied the 11th before paring the remainder of the holes. Martin had four birdies and no bogeys on Saturday. The All-ACC golfer had birdies on the fifth, eighth, 11th and 18th holes. Stanley is in sixth place and Martin in 11th entering the final round. Martin improved from 27th to 11th place with his performance on Saturday.

David May had a second round 73 after his opening round 69 and ranks in a tie for 14th place. May had four bogeys and three birdies on Saturday. He had back to back bogeys on the eighth and ninth holes before settling down. Phillip Mollica had an opening round 70, but slumped to 74 on Saturday. He had a solid round going, but he double bogeyed the 17th hole. Sophomore Sam Saunders shot a 78 on Saturday and his score did not count towards Clemson’s team total.