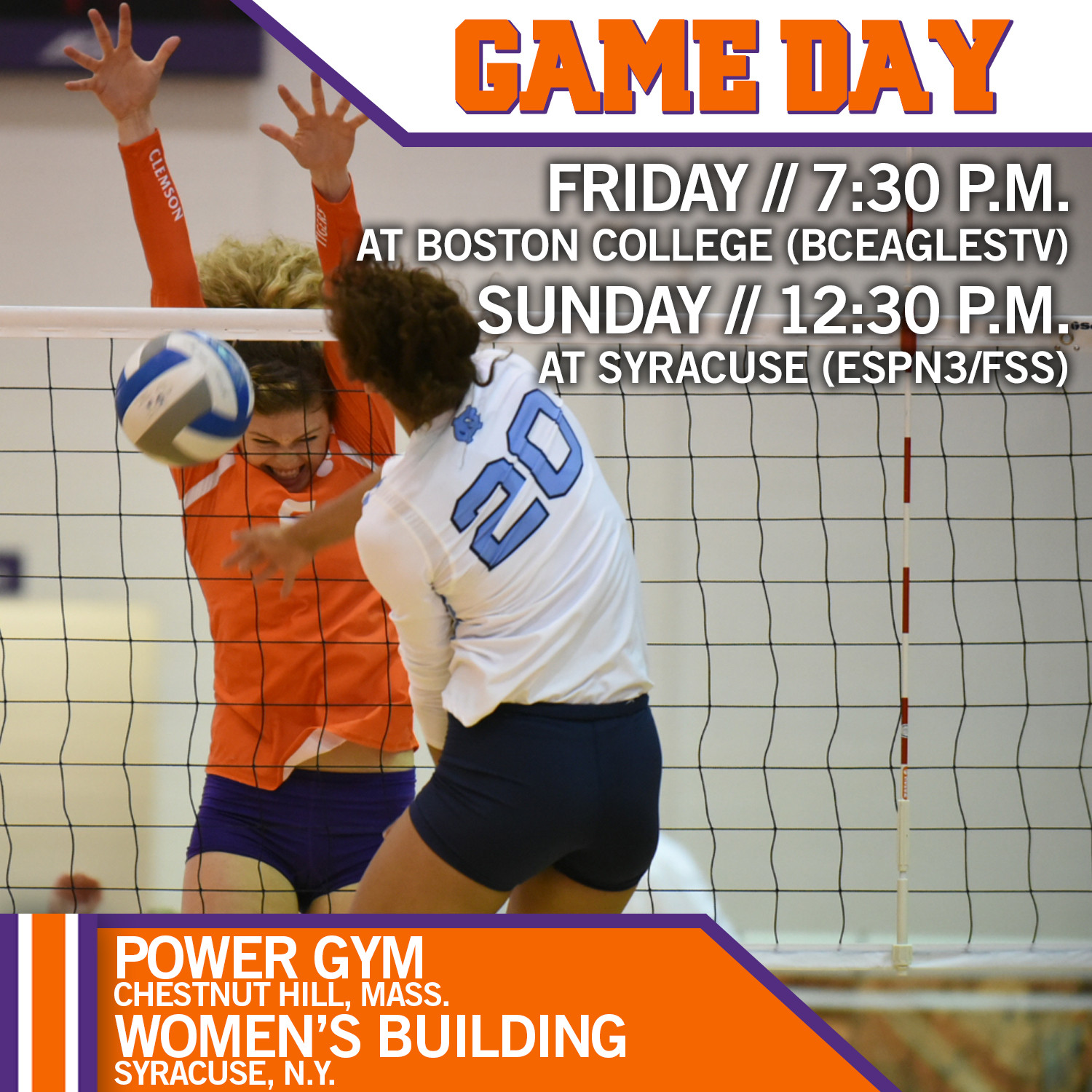 Clemson Takes On The Northeast

Clemson, S.C. – This weekend, Clemson takes on the Northeast with matches against Boston College and Syracuse. The Syracuse matchup is a rematch of their match back in late September when the two teams battled through four tight sets with the Orange coming out on top, 3-1 (23-25, 19-25, 25-23, 22-25).

Last weekend against North Carolina, Clemson’s Irem Bayramoglu and Kailey Harvell had the most success. Both came off the bench and were efficient offensively with. Bayramoglu killed four balls on seven errorless swings for a .571 hitting percentage. Harvell threw down seven kills with just one error on 15 attempts.

Taylor Daniel was the starting setter once again and tied her career-high with 22 assists in both matches. She also killed four balls on nine attacks against North Carolina.

Keelie Arneson recorded her 2,500th career dig against North Carolina and is now 14th all-time in NCAA history with 2,506. She needs just 12 digs to climb the list to 13th all-time and needs 32 to become 11th all-time.

Notes (in 140 characters or less)  • Clemson’s eight freshmen is the highest total in the Atlantic Coast Conference.• Freshmen have combined for a total of 302 sets. Sophomores, juniors, seniors and graduate students combine for 402.• Freshmen have accounted for 41% of Clemson’s kills, 45% of its attacks and 58% of its blocks.• Hugh Hernesman is the ninth head coach in Clemson volleyball history.• Keelie Arneson’s 15 digs against #17 Florida State broke her into the NCAA’s list of all-time career dig leaders.• Keelie Arneson is the NCAA’s active career digs leader with 2,506 digs. The total ranks her 14th all-time in NCAA history.• Keelie Arneson is the 36th Clemson student-athlete to be recognized as one of the NCAA’s career leaders in a statistical category.• If Keelie Arneson duplicates her ‘13 performance (712 digs) she will have the second most digs ever recorded in D-I women’s volleyball.• Keelie Arneson ranks 23rd in NCAA history with a career 5.31 digs per set average.• Keelie Arneson currently leads the ACC with 375 digs and a 5.00 digs per set average.• Keelie Arneson’s 5.00 digs per set average ranks her 27th in the nation and is the third best average in a power five conference.• Leah Perri recorded her 900th career kill against Pittsburgh.• Leah Perri headlines the Clemson attack with 267 kills in 2015 which is the eighth most in the ACC.• Leah Perri ranks eighth in the conference with a 3.47 kills per set average.• Leah Perri is ninth in the ACC with 304.5 points and is 10th with 3.95 points per set.• Leah Perri has double-digit kills in 15-of-22 matches this season.• Kate Federico ranks sixth in the conference averaging 8.66 assists per set.• Kate Federico ranks 10th in the conference with 563 assists.• Kate Federico has eight double-doubles this season and 11 matches with 30 assists or more.• Kate Federico’s 1,171 assists last year are the second most ever recorded by a Clemson freshman.• Kate Federico’s 1,171 assists in 2014 was the second highest total in the ACC and the most recorded by a freshman.• Kailey Harvell has recorded 10 or more kills in 11 of Clemson’s 22 matches this season.• Kailey Harvell is second on the team and not far behind Leah Perri with 217 kills and a 2.82 kills per set average.• Kailey Harvell hit .484 on the outside (16-1-31) against Miami.• Kailey Harvell is credited with a career best 17 kills, and five aces to go along with eight digs against Syracuse.• Kennedy Wilson-Talmadge recorded her first career match with 10 digs or more, digging 16 balls against Syracuse.• Kennedy Wilson-Talmadge has 108 digs in 62 sets, which is the most digs of Clemson’s reserves.• Kennedy Wilson-Talmadge is five digs away from the fourth highest total on the team with 15 fewer sets.• Freshman, Kennedy Wilson-Talmadge recorded her 100th career dig against Pittsburgh.