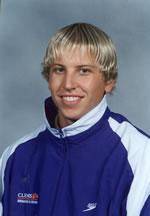 CLEMSON, SC – The Clemson men’s and women’s swimming and diving teams will travel to Charleston, SC on Friday to compete against College of Charleston in a dual meet that is scheduled to begin at 4:00 p.m. at Stern Center Pool. On Saturday, the teams will return to Clemson to play host to Virginia’s men’s and women’s teams, which finished 10th and 13th respectively, at the 2003 NCAA Championships. The meet against the Cavaliers will be held in McHugh Natatorium and is scheduled to begin at 1:00 p.m.

Clemson’s men’s team is 4-1 on the season and 1-0 in the Atlantic Coast Conference, most recently defeating Maryland and Virginia Tech in Blacksburg, VA. Last weekend, the Tigers were led by Buddy Reed, who won the 200 IM and was a member of the Tigers’ winning 400 free relay team, and took second place in the 200 back against the Terrapins and Hokies.

The Tiger women’s team is 3-2 overall and 0-1 in conference action, as the team defeated Virginia Tech but fell to Maryland last weekend. Kim Routh led the Clemson women’s team against the Hokies and Terrapins, winning both the 500 and 1000 free and setting Virginia Tech War Memorial Pool records in both events at the meet.