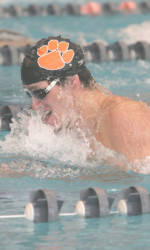 Clemson, SC – The Clemson Swimming and Diving teams hosted their annual awards banquet Friday night to recognize the outstanding achievements they accomplished this season. The men’s team racked up a record of 9-3 (4-3 ACC). The nine wins were the most by a Clemson men’s team since 2003-04. The Lady Tigers also had a season to remember as they posted a 10-5 (4-4 ACC) record. This was only the second time in the last 19 years that the women’s team reached double-digit victories.

Leading the women’s team all season was sophomore Michelle Parkhurst. Parkhurst (Vienna, VA) was rewarded for her efforts with the team’s MVP award. She broke the school record in the 200 backstroke (1:57.40), and was also a member of the ACC Champion and ACC record setting 200 freestyle relay. Sophomore Lauren Sindall (Lititz, PA) took home the Most Improved award. Sindall was also a member of the record setting 200 freestyle relay, and took her first trip to the NCAA Championships last month.

Senior Sarah Cefalu (Slidell, LA) won the Tiger Pride award. Cefalu will leave Clemson with top-10 times in school history in the 100 breaststroke, 200 breaststroke, 200 IM, and 200 butterfly. Katrina Obas received the Newcomer-of-the-Year award. Obas (Kanata, Ontario, Canada) placed in the Clemson top-10 in three different events, and holds the second fastest time in school history in the 200 breaststroke. Sophomore Rachel Regone (Houston, TX) won the Coaches Award. Regone blazed to the school record of 22.72 in the 50 freestyle as she led off the 200 freestyle relay at the ACC Championships. The Most Dedicated award went to Peg Carter. Carter, a junior co-captain from Summerville, SC, led the young Lady Tigers through the difficult ACC schedule. Senior Mary Paulsen (Kirkwood, MO) received the Most Dedicated in the Weight Room. Paulsen had a great senior season as she was third on the team in the 100 backstroke, and fourth in the 100 butterfly and 100 freestyle. The last award of the night went to the ACC Champion 200 freestyle relay for the Most Inspirational Performance. The team of Regone, Sindall, Parkhurst, and senior Kallie Deters broke the ACC meet, North Carolina pool, and Clemson team record in the event. This was the first relay title for Clemson since 2002, and they later went on to finish 17th at the NCAA Championships.

On the men’s side, junior Attila Ruszka (Budapest, Hungary) brought home his second MVP award in as many years. Ruszka had the top times of the season for Clemosn in the 200 IM, 100 breaststroke and 200 breaststroke. He was also a member of the 200 medley relay that broke the one-year old school record, and finished the 200 IM just .09 off Matt Wilson’s school record to claim the silver at the ACC Championships. A winner of the Tiger Pride award a year ago, co-captain Jay Crout (Greenville, SC) took home the Most Improved Award. Crout had a season best time in the 50 freestyle at the ACC Championships and was also the anchor leg of the bronze medal winning 200 freestyle relay. Crout was also awarded the Most Dedicated award, the second time in as many years that he has taken home multiple awards. Junior co-captain Matt Balderston was awarded the Tiger Pride award, as well as the Most Dedicated in the Weight Room. Balderston finished the season sixth on the team in the 50 freestyle and eighth in the 200 freestyle. Freshman Matt Angelini (West Chester, OH) received the Rookie-of-the-Year award. Angelini held one of the top-five best times for Clemson in six different events.

Senior Brian Regone (Houston, TX) made it a sweep of the Coaches Awards for the Regone family. The elder Regone swam on three of the Tigers five relays at the ACC Championships, and earned a silver medal in the 400 medley relay.

Ruszka then captured his second award of the night as he won the Most Inspirational Performance for his 200 IM against in-state rival South Carolina.