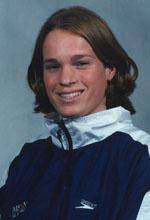 CLEMSON, SC – The Clemson swimming and diving team held its Annual Awards Banquet on Thursday, April 17 at the Tiger Den at Memorial Stadium in Clemson, SC. Thirteen different members of the team were honored with awards at the banquet.

Freshman Kim Routh and junior Mark Henly earned Most Valuable Performer honors for the 2003 Tigers. Routh represented Clemson at the 2003 NCAA Championships, finishing 22nd in the 1650 free and 43rd in the 500 free. She placed fourth in the 1650 free, eighth in the 500 free and 13th in the 200 free at the ACC Championships. Henly was the ACC Champion in the 200 back, posting a career-best time of 1:45.16 to win the event. He placed sixth in the 200 IM and 14th in the 400 IM at the championships and was named to the 2003 All-ACC Swimming and Diving team.

Routh and fellow freshman Charlie Dillon were named Rookies of the Year for the 2003 season. Dillon finished 14th in the 200 back and 16th in the 200 IM at the 2003 ACC Championships. He posted career-best times in both events at the championships.

Seniors Mary Brewer and Matt Norman, and sophomore Buddy Reed were honored with the Most Dedicated Overall award, while freshman Nichole Carlton and Reed were given the Tiger Pride award for the 2003 season. Earning the Coaches Award were senior Jenna Burtch and sophomore Tommy Rappold. Honored for their Most Inspirational Performances during the season were junior Kim Cober and seniors Josh Williams and Norman.