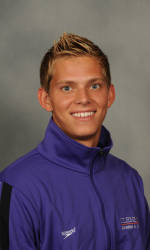 Clemson Swimming and Diving Has Successful Day in Quad Meet

“Overall we are really happy with the way we performed today,” Head Coach Christopher Ip said.

“On the men’s side, we came out a little flat in the beginning, but at the half we had a good meeting and they finished the meet strong. It was a god day from top to bottom. Senior Thomas Recko won the two backstroke events, junior David Gordon had a great day, sophomore Seth Broster won the 100 fly and the sophomore group won the 400 free relay and then freshman Eric Bruck had a solid day.”

“On the women’s side, it was a strong effort all day long. We are very excited to have gotten off to a 4-0 start and 2-0 in the ACC. They really shared the wealth today and had a solid day as everybody contributed. Senior Katrina Obas had a great day in the breast and IM, junior Sarah Smith was very solid in the distance free, sophomore Kelli Kyle won the 100 back and freshman Meg Anderson took the 50 free.”

Junior Sarah Smith had a second place finish in the 1000 freestyle and sophomores Will Clark and Alex Carr took second and fourth respectively for the men.

Clemson got its first win of the day from sophomore Thomas Recko took first for the men.

In the 200 butterfly the Tigers took three of the top five spots on the women’s side with freshman Meggie Mizelle taking fourth and sophomore Sarah Bechard in fifth.

Clemson got another win when freshman Heather Savage came in fourth.

Thomas Recko got is second win of the day as he won the 200 back to sweep the backstroke events for the men. Matt Angelini came in second with senior Jason Chatlosh taking fourth. Freshman Sarah Andrews had a second place finish for the women.

David Gordon finished second and third respectively in the 500 free with Sarah Smith came in second for the women.

The men took three of the top five finishes as Josef Knecht fifth.

The Tigers the finished the day strong on the men’s side with a win in the 400 free relay by the group of sophomores Heather Savage and Tori Cervone.

In diving, sophomore David Giambra finished second and earned his zone qualifying score in the one-meter with a 292.05. In the three-meter Clemson’s Brooke George took fourth and freshman Elizabeth Tatum finished fifth and for the men Giambra finished third.

“As a staff, we feel really good about the way we performed today. Now we will prepare for our first home dual meet against South Carolina, which is always a good meet.”

The Tigers’ will have two weekends off before South Carolina travels to Clemson for the first home meet of the season Friday, October 30 at 5:00 p.m. at McHugh Natatorium.