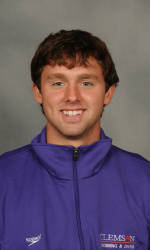 Clemson Swimming and Diving has Strong Day at Florida Atlantic

The men had a strong day winning eight events and had seven different winners. The Tigers started the day off with a top two finish in the 400 medley relay. Alex Carr followed up with a win in the 1000 free and then freshman Eric Bruck won the 50 free and Myles Oliver, Derek Barre and Marcus Elliott rounded out the top four.

Matt Angelini made it a 1-2 finish for the Tigers in that event. Thomas Recko won the 200 back and Will Clark took first in the 500 free.

Sarah Smith finish fourth and fifth in the 500 free. Katrina Obas finished fourth in the 200 breaststroke.

The Tigers will take a break for the holidays and return to action in 2010. Diving will compete in the Georgia Diving Invite January 3-5 and then the swimming and diving teams will travel to North Carolina on January 9 at 11:00 a.m.