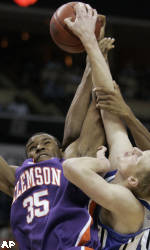 CHARLOTTE, N.C. (AP) – Clemson’s dubious basketball history has drawn chuckles for years, and the depth of its futility – try 0-53 at North Carolina – is difficult to comprehend.

Well, this Clemson team is starting to shed the image that it’s a football school in a basketball league.

The Tigers stunned No. 7 Duke 78-74 Saturday to advance to their first Atlantic Coast Conference final in 46 years. Clemson had lost 22 straight games to the Blue Devils and are the only charter member of the ACC to never win the league tournament title.

Trevor Booker scored 18 points and Cliff Hammonds added 17 for the third-seeded Tigers (24-8), who hadn’t beaten the Blue Devils since 1997.

Clemson pulled away in the second half to spoil a much more familiar North Carolina-Duke rematch in the championship. Instead the Tigers will get a shot at the top-ranked Tar Heels on Sunday, the first time they’ll play on the final day of this tradition-packed event since they lost to a Wake Forest team that included Billy Packer in 1962.

“I didn’t know that,” said coach Oliver Purnell, in his fifth year at Clemson. “I knew it was a long time ago and I knew we’d maybe only been in it once and never won it.

“I don’t spend a lot of time with streaks with these young guys and that kind of thing,” he added. It’s this year’s team. … I think those weights are too heavy and insignificant.”

The athletic Tigers, a lock to make their first NCAA tournament in 10 years, exploited Duke’s weakness inside when it mattered.

Rugged James Mays, who scored 16 points, had two three-point plays in an 11-4 run that snapped a 56-all tie.

“If they hit their free throws, they’re as good as anybody,” Duke coach Mike Krzyzewski said.

K.C. River’s transition dunk after DeMarcus Nelson turned the ball over in the closing seconds iced it, setting off a wild celebration for the Tigers, who had been 14-54 in the ACC tournament before beating Boston College on Friday.

Clemson’s Sam Perry ripped off his jersey as the final horn sounded and ran up and hugged the Clemson mascot. Clemson’s fans milled around in the arena, almost unsure of what to do and perhaps preparing to extend their hotel reservations.

“We’re just glad they’re here at the tournament having a great time and they really deserve everything that’s happening to them because they’ve been a big part of our success this year,” Purnell said.

Paulus scored 17 points, Nelson added 14 and Jon Scheyer 13 for the Blue Devils, who failed to reach the title game for the second straight year after a stretch of seven ACC titles in eight seasons.

“We played winning basketball,” Krzyzewski said. “That’s what makes great games is when both teams play winning basketball. … I think we’re playing really good basketball right now. We just need to get some rest and get going in this NCAA tournament.”

With fans still buzzing over North Carolina’s thrilling 68-66 comeback win over Virginia Tech in the opener, Paulus and Hammonds put on an outside-shooting competition in the first half.

Both players were 4-of-5 from the field, but Paulus was 4-of-4 from the free throw line and Hammonds never got there as Duke took a 31-30 lead.

The Tigers started the second half on a 9-0 run, only to watch Duke retake the lead on Nolan Smith’s 3-pointer with 9:45 left.

But the Blue Devils faded down the stretch behind poor shooting.

Duke made only six of 26 3-pointers in their second loss in three games.

“They did a good job the last few minutes of switching the ball screens, using their length to press up and make us put the ball on the floor,” Paulus said. “If we were to take a 3, it was a contested, tough shot.”

Kyle Singler, the ACC rookie of the year, had his second straight poor game, finishing with two points on 1-of-9 shooting. Gerald Henderson was held to seven points in 20 minutes and jammed his troublesome right wrist.

While Clemson can’t do anything about its futility at North Carolina on Sunday, the Tigers can avenge two regular-season losses to Tar Heels. Both games went to overtime.

One rout is already been set. The Tar Heels will hold a 29-2 edge in title-game appearances.