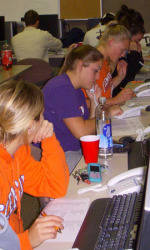 The Student-Athlete Advisory Committee (SAAC) and the IPTAY Student Advisory Board (ISAB) participated in Thank-A-Thon’s to thank IPTAY donors and IPTAY Representatives. In December, SAAC called over 1,000 IPTAY donors to thank them for their contributions for 2008.

SAAC is comprised of 44 student-athletes, who represent all of Clemson’s sports respectfully. They participate in many community service projects throughout the year, including the Thank-A-Thon. Other community service projects are the Be a T.I.G.E.R! program, Schilletter Night and the Edwards Middle School Buddy Program. Michael Freeman, a junior on the Tiger baseball team, coordinated the event.

“We were able to call a large number of IPTAY members and thank them for their support. They really seemed to appreciate us calling to thank them, which made the time we put into it even more worthwhile,” said Freeman, when asked about the Thank-A-Thon.

In January, ISAB members called members of the IPTAY Representatives program to thank them for all their hard work and dedication to IPTAY and Clemson Athletics. ISAB is comprised of IPTAY Collegiate Club members who are involved in the IPTAY Collegiate Club Rewards program, hosted the Clemson vs. Wake Forest football viewing party, as well as the thank-a-thon. Katie Privett, the group’s president, was very excited that ISAB was able to participate in the thank-a-thon.

“The members of ISAB really enjoyed contacting the IPTAY Reps. It was nice to hear the reps voices light up when we told them we were students calling to thank them for all they do for IPTAY and Clemson. I’m glad we got the opportunity to give back and hope to do it again before the semester is over!”

Between the two thank-a-thon’s, approximately 2,000 IPTAY members were thanked for their support of Clemson.