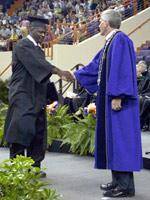 The NCAA released its graduation rate data for student-athletes who entered school in the 1996-97 academic year. Clemson trailed only Rice, Vanderbilt, Wake Forest, Northwestern, Hawaii and Notre Dame when it came to graduation rate among African American football players who entered that year. Boston College, Duke, Stanford and Penn State were among the schools below Clemson’s 89 percent figure.

NCAA figures examine scholarship athletes only. Student-athletes who transfer to other institutions, even if they leave in good academic standing and graduate from the second school, are classified as non-graduates for the initial institution.

As far as overall graduation rate among football players who entered that year, Boston College had the highest figure in the nation at 95 percent, while Notre Dame was second at 92 percent. Clemson was third among ACC schools with its 78 percent, trailing only Wake Forest (86 percent) and Duke (83 percent).

“These are good numbers, it is a testimony to the work that is being done by our staff at Vickery Hall,” said Clemson Head Coach Tommy Bowden. “Our coaches have emphasized academics since we came to Clemson and the results have been good. We certainly want to continue to improve and strive to have all of our players earn their degree from Clemson.”

Clemson has eight players, including seven starters on the 2003 team who already have their undergraduate degree, tying the school record for active graduates on the same team. Twenty-seven Clemson football players have earned their degree before the end of their playing career since Bowden came to Clemson in 1999. That is the high figure for any five-year period in Clemson history.