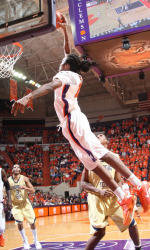 When a 240-pound forward slam dunks a basketball, some fans probably wonder how much force is being generated into the goal. Students at Clemson University now can answer that question with a new creation: a first-of-its-kind basketball rating system that measures the impact of a slam dunk.

Civil engineering professor Scott Schiff and his students have created a system that not only measures the intensity of the dunks, but also displays that information almost immediately to fans. (See related video by visiting the full article on www.clemson.edu.)

“Fans not only love seeing a dunk, they love knowing how much energy goes into a dunk. It’s the same entertainment value of measuring the speed of a baseball pitch,” said Schiff. “If this project is successful it could be the first of many systems installed in gyms across the country.”

“Ray Sykes had a nasty dunk at the East Carolina University game,” said Jonathan Cox, one of the students working on the project. “It peaked at a little over 30 g’s, one of the highest recorded so far. That’s awesome when you consider an earthquake’s ground motion produces accelerations around point five and one g.”

The rating system is a joint venture between the Clemson Student Chapter of the Structural Engineers Association and the Clemson Athletic Department.

“Anything that adds to fan enjoyment of the game, we support,” said Mike Money of the Athletic Department. “And we’re always happy to support student research.”

The device uses a combination of two accelerometers, which measure acceleration, and the principles of basic physics to allow students to calculate within 15 seconds of the dunk how much energy was imparted to the basketball goal. Measurements appear on the video board almost immediately.