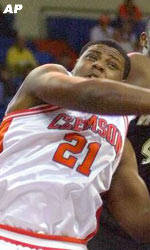 CLEMSON, S.C. – Ed Scott’s only basket of the second half lifted Clemson, playing without Atlantic Coast Conference leading scorer Will Solomon, to a 78-74 victory over Wofford on Saturday.

The Tigers had built a 20-point lead in the second half, but fell behind 72-71 on Ian Chadwick’s long, floating 3-pointer with 2:12 remaining.

Scott, a point guard averaging 4.6 points, hit a straightaway jumper from 15 feet to retake the lead, 73-72.

Dustin Braddick had two free throws and Tony Stockman had one down the stretch for Clemson (6-2).

Wofford (4-5) had chances to come back. But Chadwick threw a pass away, Lee Nixon missed a 3-pointer and Chadwick was short on a driving shot that would have tied the game with 16.8 seconds left.

It’s not surprising the game came down the wire – Solomon led the team and the ACC this year at 18.6 points a game and Wofford won here last year, 79-74. But the Tigers seemed in sync behind Stockman, who led the team with 23 points, and center Adam Allenspach, who scored 17.

Nixon and Chadwick had consecutive baskets to close Wofford’s 27-14 run the next eight minutes.

Usually, that’s Solomon’s time to choke off rallies with a 3-pointer or driving shot. But he was on the bench, suspended for what Clemson coach Larry Shyatt said was behavior in practice “detrimental to the team.”

So the Wofford charge continued. Grant Sterley had two baskets and Nixon one to bring the Terriers to 65-62.

But Scott played the Solomon role and the Tigers held off the Terriers.

Solomon was the Atlantic Coast Conference’s top scorer last year at 20.9 points a game and was tied with Duke’s Jason Williams for this season’s lead with an 18.6 point average.

He had started the past 37 games and often was the Tigers’ first, second and third shooting options on the floor.

But Stockman looked just as confident and poised as Solomon has the past three seasons with 15 points in the first half as Clemson led 43-29 at the break.